U.S. to Israeli Delegation: Come If You Must, But Our Minds Are Made Up 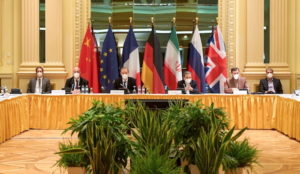 While Robert Malley sends, via intermediaries, his billets-doux to Iran’s negotiator Mohammed Javad Zarif in Vienna, Israel is sending a high-level delegation of security personnel, headed by Yossi Cohen, the director of Mossad, to Washington, hoping to make the case for American caution, rather than insensate haste, in returning to the JCPOA and lifting sanctions on Iran. A report on this difficult mission is here: “Israeli Security Officials Head to Washington to Share Iran Threat Intel as White House Says It Can’t Be Swayed on Nuclear Deal,” by Sharon Wrobel, Algemeiner, April 26, 2021:

A high-profile Israeli security delegation, headed by Mossad Director Yossi Cohen, is arriving in Washington this week to discuss the dangers of restoring the original 2015 Iranian nuclear accord just days after the White House signaled that the Biden administration will not be swayed to change its policy on the deal.

Ahead of the arrival of the delegation of Israeli senior security officials, White House spokeswoman Jen Psaki on Friday answered “no” when asked at a press briefing whether the visit was likely to change the US administration’s stance on reviving the nuclear deal, to which Prime Minister Benjamin Netanyahu is strongly opposed.

How indecent of the Bidenites to proclaim to the Israelis, even before they arrive, in front of the whole world, that there is nothing they can say to the Americans that will change their minds. Their minds are made up. The Americans don’t want to be reminded that just a few months ago they were themselves talking about the need “to lengthen and strengthen” the agreement with Iran. They are in no mood to listen to their closest ally in the Middle East. They don’t want to listen to the Israelis, who know better than anyone what Iran is up to with its nuclear program, understand how it plans to comply, or to pretend to, with the JCPOA, and what it will do in 2030 when it is allowed its “break out” and can manufacture, completely legally, nuclear weapons. They don’t want to listen to the Israelis, even though Israel, not America, is the main target of Iran’s nuclear program. How many times has Iran threatened to destroy the Jewish state? The Bidenites don’t want to hear about it. They don’t want to listen to the Israelis, whose tiny country’s very survival may depend on what agreement is concluded with Iran in Vienna and who, therefore, have beyond all others earned the right to be heard. The indifference of the Biden people to Israel’s attempt to present its arguments against a return to the Iran deal is unspeakable.

Despite Psaki’s statement, Dore Gold, President of the Jerusalem Center of Public Affairs, argued that that “it is important that Israel shares all the relevant intelligence on Iran and articulates what the problem is with negotiating with Iran.”

The most persuasive arguments are made face-to-face,” Gold, who served as Director-General of the Israel’s Ministry of Foreign Affairs in 2015, told The Algemeiner. “In the past Israel and the US had different assumptions on Iranian behavior, which have now become even more pronounced. Iran’s record of compliance with signed agreements is very weak.”

Gold is too optimistic – or perhaps he simply won’t allow himself to believe that the Americans can be so idiotically close-minded.  He’s still talking about the value of making “arguments…face-to-face” but the Americans have already said that nothing that is presented to them, no information the Israelis bring with them about just-uncovered examples of Iranian deception, no news about Iran’s ballistic missile program, or the nuclear facilities just completed deep inside the mountain at Fordow, will change their minds. “Don’t confuse us with facts. Our minds are made up.”

…Michael Oren, Israel’s former Ambassador to the US, told The Algemeiner that he is concerned about the symbolic significance of the Israeli delegation traveling to Washington after the White House comments on Friday.

“This is kind of humiliating after Israel’s important ally in the Middle East said it will not listen. I would be very hesitant in sending this delegation,” Oren commented. “If we are going back to the JCPOA, which is flawed, there could be a very dangerous outcome.”

“There is a lot of visual appearance in this in that it shows that there was consultation with Israelis. We should be very careful [not] to legitimize the agreement,” Oren warned.

Oren is right: the Israelis are being humiliated by Jen Psaki’s unembarrassed acknowledgement that there is nothing the visitors can say, no new information that they may bring, that will change Administration minds. And by agreeing to meet with members of the delegation in Washington, the Biden people – Oren fears – can make it appear to Israel’s American supporters that they did, after all, consult with the Israelis.

…There are ongoing discussions — or negotiations, I should say, that are happening now — they’re indirect, of course — on the potential for a diplomatic path forward on the new — on a nuclear deal,” White House’s Psaki said on Friday. “As it relates to Israel, we have kept them abreast as a key partner of these discussions — or of our intentions, and we will continue to do that on any future visits.”

It is not true that the Bidenites have “kept them [the Israelis] abreast” of what’s been going on in Vienna. A great deal has not been shared, which is one source of Israeli anxiety. Nor has the Biden administration asked for Israel’s opinion on those negotiations, much less allowed any Israeli objections to be taken into account. The Biden administration wants this deal to go through. It will jump through whatever hoops the Iranians hold out. In February, it was still insisting that Iran had to go first, and fully return to the deal, before American sanctions would be lifted. Iran wouldn’t have it, and we no longer hear that condition precedent being mentioned.

Commenting on the ongoing talks in Vienna, Gold noted that “there is a real dilemma, because if you remove sanctions there is a huge windfall of funds that becomes available for terrorist activities in the Middle East and around the world. At least the Biden administration is talking about a longer and stronger deal but I don’t think that the Iranians will agree.”

Gold apparently hasn’t noticed that while the Biden administration did, very early on, talk about the need for a “longer and stronger deal,” it has ceased to mention that requirement altogether. Now it refers vaguely to another deal that might be reached after the return to the JCPOA by both sides is accomplished, but why would Iran at that point, having obtained the lifting of all the American sanctions, feel any pressure to agree to a second deal about ballistic missiles and regional aggression through proxies?

Gold suggested that before sanctions are lifted Iran needs to demonstrate that it has changed direction, that it will not help the Hezbollah in missile inventory, and that it is prepared to confine itself to the terms of a deal.

Dore Gold’s suggestions make sense, but there is not the slightest chance that Iran would agree to any of it, nor that the Biden administration would put the slightest pressure on Iran to accept it. The sanctions will be lifted without any further Iranian concessions on missiles to Hezbollah or anything else; sanctions-lifting will provide Iran with a bonanza calculated to be at least 100 billion dollars, money to spend on weapons for itself and for its proxies in Yemen, Iraq, and Lebanon. Once it has the money, Iran will do what it likes, which means it will violate many of the terms of the JCPOA, just as it did between 2015 and 2018, when Donald Trump put an end to the farce, withdrew from the deal, and clamped crippling sanctions on Iran, that were just starting to have a devastating effect on Iran’s economy when the Biden cavalry came riding to Tehran’s rescue. And Israel will have to recognize that when it comes to foiling Iran’s nuclear ambitions, the Jewish state is now very much on its own.