Syria: Three women and a man stoned to death under Sharia, one for adultery

Barbaric acts such as stoning are still practiced in countries including Iran, the United Arab Emirates, Iraq, Qatar, Mauritania, Saudi Arabia, Somalia, Sudan, Yemen, northern Nigeria, Afghanistan, Brunei, and parts of Pakistan. This is because they are prescribed in Sharia. Meanwhile, there are numerous jihad groups worldwide that also adhere to the fullness of Sharia. Western analysts routinely ignore or downplay this and proclaim that Islam is a religion of peace, despite the ongoing genocide against Christians, the persecution of other religious minorities, threats to destroy Israel altogether and initiate a new genocide of the Jews, and the like. Not to mention zealous efforts to establish a caliphate in various regions and ultimately worldwide. Despite 1,400 years of violent jihad, it’s all overlooked.

Last year, the group’s [HTS] leader Mohammed Al-Jolani released a number of photographs showing him wearing western style clothing and visiting civilians living in the province, in an attempt to provide a softer image of the militant group.

Although Al-Jolani was mocked for his photos, jihadist brides of the Islamic State have taken up the same tactic of looking Westernized to fool people and gain sympathy. See HERE and HERE. 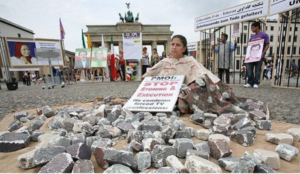 Three women and one man were stoned to death in Idlib, northwestern Syria, on Monday, on the orders of Islamist militant group Hay’at Tahrir Al-Sham (HTS).

According to sources close to HTS, who spoke to The New Arab’s Arabic language service Al-Araby Al-Jadeed, the individuals executed were charged with “adultery” and “attempted murder”.

They were brutally executed in the city centre and the sentence was carried out by the security apparatuses, sources said.

HTS, which used to be affiliated with Al-Qaeda, dominates much of Syria’s rebel-held Idlib province in northwestern Syria, have been known to carry out public executions against civilians.

Last year, the group’s leader Mohammed Al-Jolani released a number of photographs showing him wearing western style clothing and visiting civilians living in the province, in an attempt to provide a softer image of the militant group.

Al-Jolani’s images and demeanour were the subject of much ridicule online, including by the US state department, who commented on one of the photographs, saying “Hello, handsome Jolani. What a great suit! You can change your attire all you want, but you will always remain a terrorist.”….