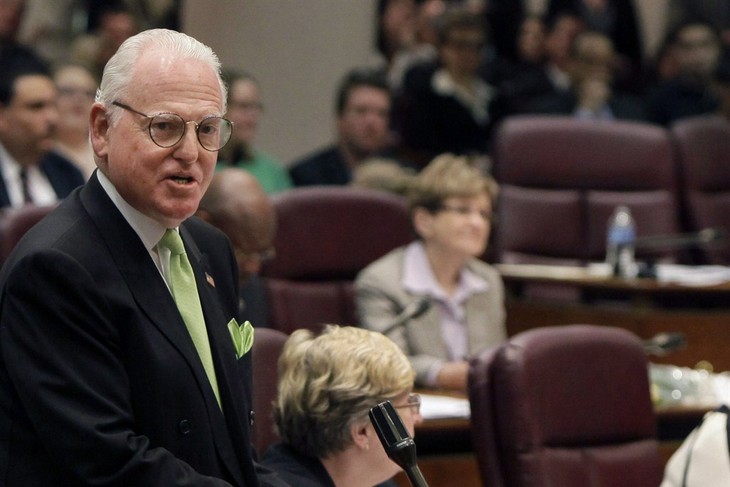 You’ve probably never heard of Chicago’s U.S. attorney John Lausch. For the last two years, he has been going after some of the biggest, most powerful Democrats in the state of Illinois.

His office indicted a Chicago alderman who had been serving since 1969. Edward Burke had been in the crosshairs of prosecutors for four decades but it wasn’t until Lausch came into office that he was indicted.

Then there’s the case of the most powerful state politician in the United States, Illinois House Speaker Mike Madigan. His aides and cronies have been indicted for various crimes of influence over the years and Lausch has now set his sights on Madigan himself.

In fact, it’s believed Lausch has targeted some other high-profile Democratic politicians in other investigations. It’s a target-rich environment and Democrats in Illinois have gotten extremely nervous about who Lausch will go after next.

Now it appears, that bringing down corrupt Democratic politicians will be the job of the next U.S. attorney. Along with 56 other U.S. attorneys named by former president Trump, Lausch will lose his job — fired by Joe Biden. “It’s tradition,” said Biden supporters. This is true. But it’s also “tradition” to keep prosecutors in place who were pursuing high-profile cases. Lausch certainly qualified under that criteria.

Lausch’s abrupt removal has drawn bipartisan criticism from Illinois lawmakers who say he should be allowed to finish his work or depart on a longer timeline to ensure an orderly transition. The president asked all Trump-appointed U.S. attorneys to resign by the end of February but allowed two to remain in place to conclude politically sensitive work.

With much of the state’s Democratic establishment in his sights, it’s not clear why Biden did not extend the same courtesy to Lausch. Madigan’s resignation, timed as it is with Lausch’s imminent departure, will raise even more pointed questions for Lausch’s successor about the future of the case.

The timing is particularly suspicious in Madigan’s case. Lausch indicted several Madigan associates, including his most trusted aide, for their role in a scandal involving the state’s primary electric utility, ComEd. The company provided payments, subcontracts, and no-show jobs to various Madigan cronies in return for favorable legislation. Madigan had probably been doing this sort of thing regularly over his many years as speaker of the Illinois House. He facilitated the scheme, but never directly benefitted financially — that prosecutors know of, anyway. It’s illustrative of the political-business-criminal nexus that robs the taxpayers and enriches the powerful.

It’s a tale told all too often in Illinois. Just your run-of-the-mill influence-peddling, log-rolling and pay-for-play by crooked pols who are used to getting away with it.

Lawmakers in both parties have raised concerns that Lausch’s removal would disrupt the ComEd probe. Sens. Dick Durbin (D., Ill.) and Tammy Duckworth (D., Ill.) said Lausch should remain in place until his successor is confirmed by the Senate, a move supported by Illinois’s five Republican congressmen. The GOP lawmakers emphasized that the scope of the investigation is “historic” in a Feb. 9 statement.

Who else in Illinois is being stalked? Biden will be watched carefully as far as who he names to replace Lausch. And more importantly, who else will be in the prosecutor’s crosshairs.