Vatican Conference to Promote Mary as ‘a Jewish, Christian and Muslim Woman’

'Belonging to these three religious and multi-cultural worlds (Judaism, Christianity, Islam), the figure of Mary is in itself a pressing and constant invitation to intersect and interconnect these same worlds'

Does the Vatican really think that this will increase harmony and mutual respect between Muslims and Christians? Vatican top dogs should consider a statement of the Muslim Brotherhood theorist Sayyid Qutb: “The chasm between Islam and Jahiliyyah [the society of unbelievers] is great, and a bridge is not to be built across it so that the people on the two sides may mix with each other, but only so that the people of Jahiliyyah may come over to Islam.” Dialogue, in other words, is all too often for the Islamic side a means of dawah, Islamic proselytizing, not a genuine discussion. In the Qur’an, the Virgin Mary gives birth to Jesus, but it is stated that he is not the Son of God (19:35), not divine (5:17), and was not crucified (4:157), and thus could not be and is not the savior and redeemer of the world. Do these Vatican officials really think that their Muslim interlocutors will discard what the Qur’an tells them and move closer to the Christian view? Or are they discarding the Christian view of Mary (and hence of Jesus) themselves, so as not to offend their “dialogue” partners? Almost certainly.

“Leave them; they are blind guides. And if a blind man leads a blind man, both will fall into a pit.” (Matthew 15:14) 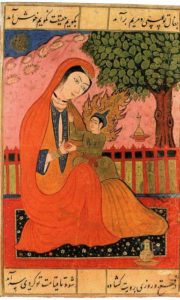 “Vatican to organize conference promoting Mary as ‘model for faith’ for both Christianity and Islam,” by Jeanne Smits, LifeSite News, February 16, 2021:

February 16, 2021 (LifeSiteNews) — “Mary, a model for faith and life for Christianity and Islam:” is the title of an upcoming series of online webinars presenting Our Lady as a bridge between Catholicism and Islam organized, among others, by the Pontifical Academy of Mary (Pontificia Academia Mariana Internationalis or PAMI).

Starting on February 18, ten weekly conferences will be given jointly by Catholic and Muslim speakers who will seek “dialogue, knowledge and cooperation” regarding themes such as “Mary, a woman of faith,” “God who is love and faith,” prayer, purity, hospitality and non-violence, fasting and penitence, fraternity and citizenship.

The Franciscan pontifical University of Rome, the “Antonianum,” is another co-organizer of the event through its Duns Scot Chair of Mariological Studies as well as the International Islamic-Christian Marian Commission and the Grand Mosque of Rome and its Islamic Cultural Center of Italy.

The Italian weekly Famiglia Christiana presented the event in the light of the Abu Dhabi declaration, illustrating its article on Saturday with a photo of Pope Francis signing the Human Fraternity Document together with Imam al-Tayyeb of the Al-Azhar University of Cairo.

Quoting at length from the Document, Gian Matteo Roggio commented: “The course of these webinars is therefore aimed at active, free, conscious, solidary and popular participation in the opening of this space of intersection, interconnection, hospitable reception, thus meeting the explicit requests of Pope Francis and the Grand Imam of Al-Azahr, the noble Sheikh Ahmad Al-Tayyeb.”

Readers of Famiglia Christiana in Italy are being asked to believe this: “The figure of Mary, a Jewish, Christian and Muslim woman, belongs by right and by fact to the path, the processes and the experiences that contribute to the generation of such an educational path, which makes a positive and confident wager on the embrace between generations and on a new politics and economy, where countries do not need to build their identity on contempt and on systematic negation, whether overt or covert, of the other and of others: an identity, that is, at the expense of the dissimilar and ready to identify in the other the cause of all the ills, failures, limitations and problems that instead have their multiple causes elsewhere. Belonging to these three religious and multi-cultural worlds (Judaism, Christianity, Islam), the figure of Mary is in itself a pressing and constant invitation to intersect and interconnect these same worlds, even making them a model of plural coexistence where the boundaries of each are made to allow communication, passage, exchange; and not to be closed, according to the many figures of exclusion that have, as their fruit, the culture, psychology, politics and economics of war, hatred and inhumanity.”

In the same grandiloquent style, Roggio added: “The webinars will end during the month of Ramadan with ‘the dates of Mary’ in the Conference Hall of the Great Mosque of Rome (health situation permitting): in memory of what is stated in the Holy Quran (Sura 19,22-26), namely that after giving birth near the trunk of a palm tree, she was called by the newborn child who told her ‘Do not be sad […] shake the trunk of the palm tree towards you and it will drop fresh and ripe dates on you. So eat them,’ a meal of friendship and fraternity will be shared once the sun goes down, as a tangible pact of alliance for the service to the common good of all, no one excluded, in obedience to the ‘understanding of the great divine grace that makes all human beings brothers’ (Document on human brotherhood for world peace and common coexistence).”

Roggio, the author of these very pro-Islamic lines, is not simply a journalist, he is a member of the religious order, the Missionaries of Our Lady of La Salette. He studied Mariology at the Pontifical Academy of Mary and is now a professor at the same institution. Roggio will be giving the lecture on “God who is love and mercy” on February 25, together with Islamic theologian Shahrzad Houshmand Zadeh, who teaches at the Gregoriana Pontifical University.

Roggio’s words therefore clearly express the spirit of the coming Islamo-Christian webinars: a spirit of profound relativism and misleading equation between the Catholic faith and Muslim beliefs.

The real question is this one: is the Virgin Mary whom we Catholics honor as the Mother of Jesus, only Son of God and the Word Incarnate, the same person as the woman named “Miriam” by the Quran? Is her son, Îssa, the Quranic equivalent of Jesus? He would then be a “Jesus” who could not in any way be the Son of God, because, the Quran proclaims, such an idea is “something monstrous” and that “it is not fitting for the Most Merciful to have a son.”…