“The Greeks who represent the last vestiges of Christian Byzantium and the Roman Empire are heading towards their final extinction in Recep Tayyip Erdogan’s Turkey, with their numbers dwindling to a mere handful” under his Islamic hardline government.

Erdogan has made his ambitions clear: he wants a revived Ottoman Empire, and his actions have shown its determination. Yet still, talking about Islam remains an uncomfortable subject, as “neither the interviewees, perhaps understandably, or their interviewer, perhaps less understandably, touched to any great extent on the reasons so many Greeks have fled their ancestral homeland in recent years.”

The scourge of Turkey’s oppression against disbelievers is not felt only by its own Christian population, but increasingly regionally. Turkey is a growing threat to its rival Iran. America under Trump has observed the growing strength of Turkey’s commitment to Islam and the increasing threat it presents, and Trump therefore imposed sanctions. By contrast, the UK has just signed a multi-billion dollar trade deal that will serve to strengthen Turkey.

Meanwhile, the Western world promotes “diversity” at any cost, along with the “Islamophobia” subterfuge, and remains willfully blind as to the violent and expansionary foundations of Islam that have been clear for 1400 years. 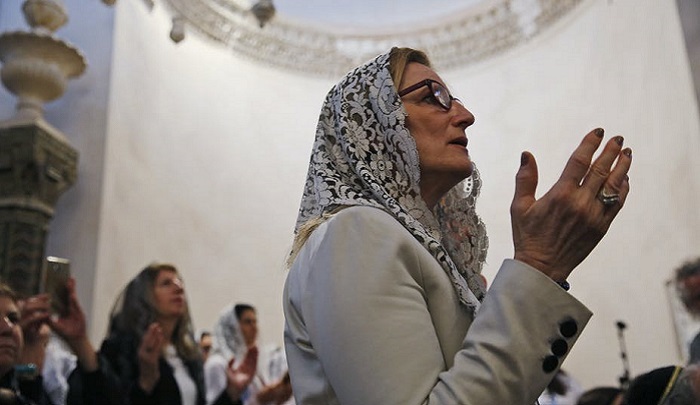 The Greeks who represent the last vestiges of Christian Byzantium and the Roman Empire are heading towards their final extinction in Recep Tayyip Erdogan’s Turkey, with their numbers dwindling to a mere handful under his Islamist government.

What is now Turkey only began to be colonised in by the Turkic peoples in earnest from around 1071, after their Seljuk ancestors had arrived from Central Asia and vanquished the Greek-speaking Christian ruler Romanos IV Diogenes’s forces at the Battle of Manzikert.

The last vestiges of the Byzantine state where finally snuffed out with the brutal conquest of Constantinople, widely regarded as the greatest Christian city in the world, in 1453, or arguably with the fall of the citadel of Salmeniko Castle in modern-day Greece in 1461, following a brave but doomed resistance by its commander, Konstantinos Graitzas Palaiologos.

Despite widespread massacres and enslavement during the Turkish conquests, however, the region’s Greeks survived and were allowed something of a cultural life, albeit as second-class citizens, for centuries — not least because they served as cash cows for their Muslim rulers through the imposition of the jizya tax.

But Greeks in Istanbul, as Constantinople is now called, have now tumbled from 200,000 as recently as 1914 to, officially, a mere 3,000 — and a Times correspondent who visited the city to interview some of the survivors, known as the Rum, reports that the true figure may be nearer to just one thousand.

The Times correspondents’ interview subjects did not describe a life as hard as that endured by some of their forebears, such as in 1821, when many of the city’s Greeks were massacred and the Patriarch of Constantinople hanged from the gate of his cathedral, or in 1955, when the security services organised violent pogroms against them in what POLITICO dubbed a “Turkish Kristallnacht”.

“Everyone is gone now,” said Lazari Kozmaoglu, the 75-year-old owner of a rare pork butcher’s shop….

Neither the interviewees, perhaps understandably, or their interviewer, perhaps less understandably, touched to any great extent on the reasons so many Greeks have fled their ancestral homeland in recent years — and, indeed, decades — but the mood against such minorities in the once strongly secular but now Islamist-led republic is souring.

The authorities have made it increasingly difficult for Orthodox Christians to receive a religious education for example, and some historic churches and monasteries have been demolished or repurposed as mosques, sometimes with little warning….