Gov. Andrew Cuomo Melts Down, Yells at Reporter Asking Him to Clarify His COVID ‘Law’ 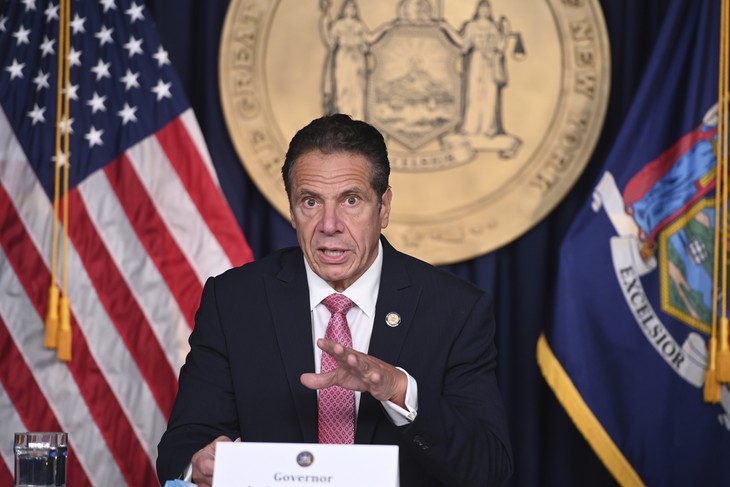 Governor Andrew Cuomo has had what is arguably one of the worst responses to COVID-19. New York State has still not accurately recorded nursing home residents’ deaths during Cuomo’s horrific policy of putting COVID-19 positive patients in nursing homes. They only counted them if they died in the long-term care facility, not if they went to the hospital first. New York is still second to New Jersey in COVID-19 deaths per million in the entire country and has a higher rate than some small nations.

Despite this, Cuomo felt emboldened to print a poster about New York’s response to mock Sun Belt governors when their states saw mild spikes over the summer. Those same Sun Belt states have nowhere near New York’s death rate. Then to celebrate his accomplishments, such as killing the elderly, destroying the economy, and implementing policies that have caused residents to flee, he wrote a book. Ironically, he titled it American Crisis: Leadership Lessons from the COVID-19 Pandemic.

Now, positive test rates are rising in New York again. First, Cuomo and the horrible NYC Mayor Bill de Blasio cracked down on the Orthodox Jewish communities. Governor Cuomo is now implementing what he refers to as the “Orange Law,” and held a press conference to address it. A local reporter asked him to explain it; the full exchange with that reporter is below. It started with a simple question about Governor Cuomo’s authority to close schools in New York City by imposing an “orange zone.” The reporter was asking on behalf of confused parents who just wanted to know whether their children’s schools would be open or closed the next day.

Cuomo’s response was the beginning of a complete meltdown demonstrating his total lack of leadership:

“First of all, let’s try not to be obnoxious. and offensive in your tone. Because you’re 100% wrong. These laws have all been in effect for months. I’ve always said we set initial parameters and then the school district picked the percent within those parameters. New York City picked 3%. We announced the “orange zone” law over a month ago. I don’t know if you were here or if you were paying attention. But that has been in effect for over a month. It always said if by the state’s numbers you hit 3% the schools close. What’s going on here [mocking the reporter] is nothing that the law hasn’t said for over a month. We then had to test out procedures. If you were paying attention, you would have known we closed the schools in New York City two weeks ago. Remember, when we did an orange zone and a red zone in Brooklyn and Queens? And we closed the schools. Don’t you remember that?

Searching the legislative database, there is no bill passed by the New York State Legislature that defines the parameters for the COVID-19 restrictions. However, many publications on the governor’s website talk about a “micro-cluster strategy.” This includes red, orange, and yellow zones that define the level of COVID-19 restrictions that will be implemented. Cuomo stating that this is a law is a stretch.

While the legislature may have given Gov. Cuomo broad authority to manage the pandemic, all of the adjustments to the locations targeted for various levels of lockdowns by color come from his office. The strategy is a complex nine-page summary that certainly makes the reporter’s confusion understandable. Cuomo’s initial answer is far from clarifying and more a declaration of his own authority over the state’s residents.

The reporter interjected. Cuomo responds and starts yelling within just a few seconds (in all caps):

The reporter said he was still confused, as Cuomo had never answered his question as to whether or not schools in New York City would be closed the next day. Cuomo responded with more yelling.

The reporter again explained it was not just him who was confused; parents in New York were confused. Cuomo responded:

No, they’re not confused. You’re confused. Read the law and you won’t be confused.

This was a stunning display of Andrew Cuomo trying to lead by intimidating. His performance is replete with finger jabs, angry faces, and yelling. Other reporters defended the first, saying the question was not obnoxious. Cuomo dismissed them rudely, yelling about the “law.” He explained that his micro-cluster designations overrule local guidelines. Reporters kept trying to clarify the strategy and how it would be implemented. By the end of Cuomo’s remarks, the whole program is about as clear as mud.