Irked Turks slam Pompeo for promoting religious freedom, call on him to focus on ‘Islamophobia’ instead Pompeo is set to meet Ecumenical Patriarch Bartholomew on Tuesday in Istanbul. He is not scheduled to meet Erdogan. The Turks are enraged because Pompeo is slated to focus on religious freedom, just months after Turkey converted two venerable Byzantine churches, Hagia Sophia and the Monastery at Chora, into mosques. Pompeo should instead, the Turks insisted, focus on Muslims as victims. The establishment media and most non-Muslim leaders around the world readily fall for this victimhood propaganda. Will Pompeo stand firm? 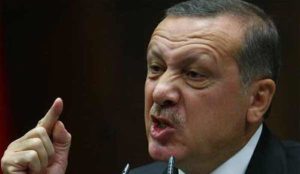 “Turkey condemns Pompeo: Focus on racism, Islamophobia in US before preaching on religious freedoms,” Ahlul Bayt News Agency, November 14, 2020 (thanks to Henry):

AhlulBayt News Agency (ABNA): Turkey has condemned U.S. Secretary of State Mike Pompeo for trying to promote religious freedom during an upcoming visit to Istanbul and called Wednesday on Washington to focus on racism and hate crimes in the United States instead.

The U.S State Department said in a statement Tuesday that Pompeo would travel to Istanbul to meet with Ecumenical Patriarch Bartholomew I, the spiritual leader of the world’s Greek Orthodox Christians.

The top U.S. diplomat plans to discuss religious issues in Turkey and to promote “our strong stance on religious freedom around the world,” the statement read.

Turkey’s Foreign Ministry rebuked the statement “as extremely inappropriate,” insisting that the country protects the rights of citizens of various faiths to freely practice their religions.

“It would be more advisable for the United States to look in the mirror first and to show the necessary sensitivity to human rights violations such as racism, Islamophobia and hate crimes in its own country,” the Turkish ministry said in a statement….