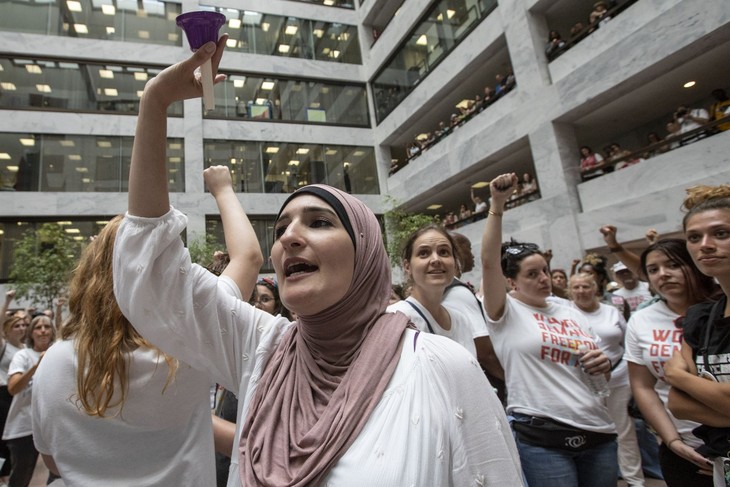 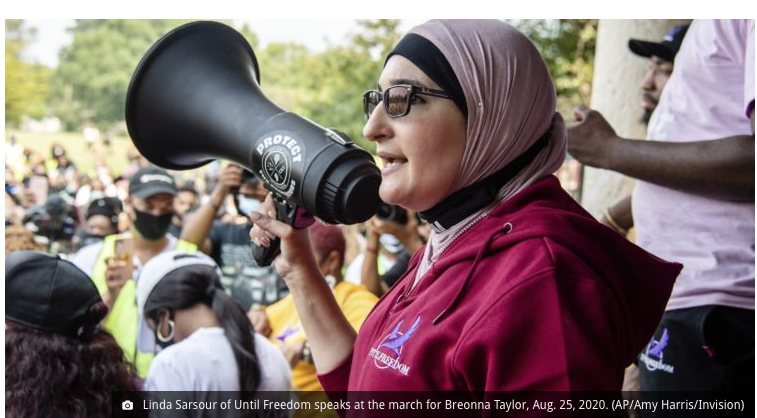 Sharia-adherent leftist activist and former Women’s March leader Linda Sarsour tweeted Wednesday: “Justice has NOT been served. Rise UP. All across this country. Everywhere. Rise up for #BreonnaTaylor.”

She meant it: yesterday evening Sarsour, who was bounced from the Women’s March leadership because of her anti-Semitism, was spotted in video from Louisville, walking among protesters and apparently leading them to their next destination. Sarsour’s presence among demonstrators in Louisville, many of whom quickly began rioting (two police officers were shot), was yet another example of the leftist/Islamic alliance.

We saw two other such examples during the riots in New York City several months ago. Urooj Rahman, a Muslim lawyer and activist for the Palestinian jihad, threw a Molotov cocktail into a police cruiser, and in Brooklyn, a Muslim migrant from Bosnia named Dzenan Camovic stabbedan NYPD officer, Yayonfrant Jean Pierre, in the neck while screaming “Allahu akbar.”

Sarsour’s presence in Louisville was no real surprise. She was arrested in Louisville on August 25 at “BreonnaCon,” an earlier protest over the death of Taylor. Back on May 27, she tweeted: “‘A riot,’ Dr. Martin Luther King, Jr. said, ‘is the language of the unheard.’ #JusticeForFloyd.”

Sarsour is also an unapologetic defender of Sharia. As far back as September 22, 2011, Sarsour tweeted: “shariah law is reasonable and once u read into the details it makes a lot of sense. People just know the basics.” Her position didn’t change over time. On May 12, 2015, she tweeted: “If you are still paying interest, then Sharia Law hasn’t taken over America. #justsaying.” And on April 10, 2016, Sarsour tweeted about Sharia again: “Sharia Law is misunderstood & has been pushed as some evil Muslim agenda.”

Sarsour tweeted on March 8, 2011: “Brigitte Gabriel = Ayaan Hirsi Ali. She’s asking 4 an a$$ whippin’. I wish I could take their vaginas away – they don’t deserve to be women.” This call for physical violence against someone she hated was a harbinger of things to come, but it received no notice among her sycophants on the left. After all, why would it? They’re committed to the same violence.

Linda Sarsour is also a practiced purveyor of the grievance-mongering that keeps the rioters’ ranks full. She is an energetic purveyor of the “Islamophobia” myth and has hysterically claimed that “Muslim kids” are being “executed” in the United States. She was instrumental in prevailing upon New York Mayor Bill de Blasio to end legal and necessary surveillance in Muslim communities in New York. She was also a frequent visitor to the Obama White House, and even claimed that the jihad underwear bomber was a CIA agent — part of what she claims is a U.S. war against Islam. She is also an enthusiastic supporter of the “Palestinian” jihad against Israel and has even claimed that feminists cannot and must not support Israel.

This is the left today. Sarsour’s anti-Semitism, her embrace of Sharia, her paranoid “Islamophobia” conspiracy-mongering – all that is the mainstream left now. For Linda Sarsour is not alone; other Muslim activists in the U.S. have actively fostered this alliance. Zahra Billoo, Executive Director of the San Francisco Bay Area office of the Hamas-linked Council on American-Islamic Relations (CAIR-SFBA), tweeted: “Non-Black POC, first and second generation immigrant Muslims friends in particular, what are you doing today to support #BlackLivesMatter?” Imraan Siddiqi of CAIR-Arizona tweeted out a video of a hijab-wearing Muslim woman kicking a tear gas canister toward police with the approving comment, “Drop-kick that tear-gas canister, sister.”

Meanwhile, not long ago in Los Angeles, rioters were so grieved and angered by Floyd’s death that they spray-painted “Free Palestine” on the wall of a synagogue. This was in line with Urooj Rahman’s Molotov cocktail back in Brooklyn. In an interview before her attack, she enunciated the common goal of both movements: “This s–t won’t ever stop unless we f–kin’ take it all down.”

In both the interview and during her attack, Rahman kept a Palestinian keffiyeh close to her face. Her sartorial choice was not incidental. With her attempted torching of the police cruiser (her Molotov cocktail didn’t light), she brought Palestinian jihad tactics to the riots in the U.S. She also revealed the congruence between the ideology of the left in America today and that of jihadists, not just the Palestinians, but all over the world.

Meanwhile, the left’s anti-Americanism and determination to “f–kin’ take it all down” has been on abundant display in the recent riots in Louisville and elsewhere, and continues, to the apparent delight of Muslims such as Linda Sarsour, Urooj Rahman, Zahra Billoo, and Imraan Siddiqi. When Rahman was arrested, she was wearing a T-shirt emblazoned with the slogan “THE STRUGGLE CONTINUES REGARDLESS.” The Arabic word for “struggle” is, of course, jihad.

Editor’s Note: Want to support PJ Media so we can keep telling the truth about the riots and attacks on law enforcement? Join PJ Media VIP and use the promo code LAWANDORDER for 25% off your VIP membership.

Robert Spencer is the director of Jihad Watch and a Shillman Fellow at the David Horowitz Freedom Center. He is author of 21 books, including the New York Times bestsellers The Politically Incorrect Guide to Islam (and the Crusades) and The Truth About Muhammad. His latest book is Rating America’s Presidents: An America-First Look at Who Is Best, Who Is Overrated, and Who Was An Absolute Disaster. Follow him on Twitter here. Like him on Facebook here.