The message here is completely and irreparably mixed, and that’s likely to be exactly how Democrat strategists want it. Bernie Sanders loves Linda Sarsour; she was even a surrogate for his campaign. Thus she had to appear at the DNC as part of ongoing efforts to keep Bernie’s base loyal and in line behind Biden. But then Biden condemned her so as to reassure the Jews and supporters of Israel who, apparently blind to what has been happening over the last ten years, still vote Democrat. But this strategy depends on no one noticing the contradictory messages. 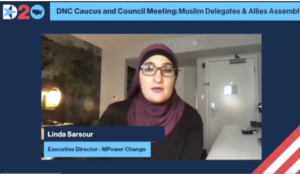 “Joe Biden has been a strong supporter of Israel and a vehement opponent of anti-Semitism his entire life, and he obviously condemns her views and opposes BDS, as does the Democratic platform,” Biden spokesman Andrew Bates said, according to CNN’s Jake Tapper. “She has no role in the Biden campaign whatsoever.”

Bates referenced the official Democratic platform, according to Tapper, which says, “We oppose any effort to unfairly single out and delegitimize Israel, including at the United Nations or through the Boycott, Divestment, and Sanctions Movement.”

Earlier in the day, the Donald Trump campaign tweeted a video of Sarsour’s appearance at the DNC saying her “extreme bigotry is welcomed by Joe Biden and Kamala Harris.”…