Michelle talks with Andy Ngo and Rob O’Donnell about the latest riots in Minneapolis, Los Angeles, and beyond.


PALESTINIAN AUTHORITY’S SUPREME SHARIA JUDGE INVOKES QUR’AN: “KILL THEM WHEREVER YOU FIND THEM.”

PALESTINIAN AUTHORITY’S SUPREME SHARIA JUDGE INVOKES QUR’AN: “KILL THEM WHEREVER YOU FIND THEM.”

Mahmoud Al-Habbash’s words here shows how seriously some Muslims today take these commands. 1,400 years have proven that individuals, groups and countries have been committing the worst abuses against humanity in the name of Islam. No other religion sanctions such abuses, which in the Islamic world are not only preached and acted upon by what Westerners call the most “radical jihadist groups,” but are propagated by the Islamic mainstream, including the highest authorities, such as Mahmoud Al-Habbash, in the Palestinian Authority, as well as those in Iran, Turkey, Pakistan, Saudi Arabia, and other countries. Warfare against and subjugation of unbelievers is also taught at Cairo’s Al Azhar and by the Muslim Brotherhood, and the list goes on.

“If someone comes to attack me… my home… my land… my homeland… my property… my honor… my family… your existence… your rights… your souls.” What must be done? “I am commanded to fight him… I am allowed to kill him”

The radical Islamist ideology that one expects to hear from ISIS and Iran is taking over the Palestinian Authority’s religious ideology. One of the most important religious leaders in the PA has announced a list of 10 “transgressions” for which Palestinians are “commanded” to fight and “allowed” to kill the “transgressors.” The “transgressions” seem to have been carefully selected in order to turn every single Israeli into a target that every Palestinian Muslim is “commanded” to fight and “allowed” kill.

The set of capital transgressions was mentioned during a relgious [sic] lesson on official PA TV by Mahmoud Al-Habbash, who PA Chairman Mahmoud Abbas appointed to be both the Supreme Shari’ah Judge and the Chairman of the Supreme Council for Shari’ah Justice, in addition to his being Abbas’ personal advisor on Islam until a year ago. His religious rulings are supreme in the PA.

The PA religious leader quoted from the Quran: “kill them,” and then defined who it is who should be killed. Feigning moderation, Al-Habbash first taught that people should not be killed without reason, whether “Muslims, infidels, idol worshippers, or people of the book [Jews and Christians].”

However, he said, there are 10 “transgressions” for which Muslims – and therefore Palestinians too – are commanded by Allah to fight, and kill if necessary. Although Al-Habbash didn’t mention Israel or Jews by name, it is clear from the context and from many years of demonization and libeling of Israelis and Jews by Al-Habbash and many other PA leaders that he was announcing to Palestinians that Israelis must be targeted.

The following are the PA’s 10 “transgressions”:

“If someone comes to attack me … my home… my land… my homeland… my property… my honor… my family… your existence… your rights… your souls.”

What must be done?

Palestinians who have been listening to the PA hate propaganda for decades undoubtedly understand that the “transgressors” who Mahmoud Al-Habbash is talking about are Israelis. The PA has been saying for years that these capital “transgressions” are exactly what Israelis are doing. The following are a few examples:

PA: Israel’s existence is an attack on “your land”….

“The chasm between Islam and Jahiliyyah [the society of unbelievers] is great, and a bridge is not to be built across it so that the people on the two sides may mix with each other, but only so that the people of Jahiliyyah may come over to Islam.” — Sayyid Qutb, Milestones, chapter 10. (Mother Mosque Foundation edition p. 140)

It is abundantly clear from this report that the Muslim framers of the bu Dhabi declaration were following Qutb’s guidance and crafting a document designed to lead Catholics to Islam. Meanwhile, the Catholic partners in the dialogue had no idea that this was happening, and assumed that their partners were operating in good faith as they were. Their naivete will cost the lives of the Christians murdered in the lands of Islam while no one speaks up for them, for fear of harming the dialogue, much less lifts a finger to defend them.

“Leave them; they are blind guides. And if a blind man leads a blind man, both will fall into a pit.” (Matthew 15:14) 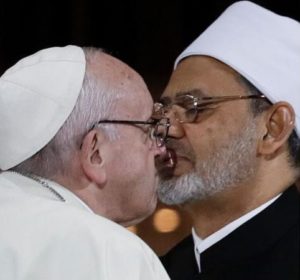 ROME (ChurchMilitant.com) – A network of Muslim converts, who face the death penalty for apostasy from Islam, are denouncing the Abu Dhabi declaration as a “deception” for “subtle but significant differences” in the Arabic text of the document.

The ex-Muslims from the Arab world are also lamenting Cdl. Gerhard Müller’s naïveté after the orthodox prelate defended the covenant on Human Fraternity for World Peace and Living Together in the May-June issue of Communio.

Müller insists that the text focuses on “fundamental human rights” with “God as their originator and guarantor,” because “all people are born free and equal in dignity and rights” and “human rights are based on the dignity that God himself bestowed on every human being.”

In a preliminary analysis of the declaration shown to Church Militant on condition of anonymity, the Arab-speaking converts say that Cdl. Müller’s reading is not based on the “Islamic theological implications of the Arabic text,” and this reflects his inability to see through the “deception” and fall for the “fake human rights rhetoric.”

Deception in the Details

The ex-Muslims note that the “linguistic/theological dissimulation” begins in the very first sentence of the covenant: “Faith leads a believer to see in the other a brother or sister to be supported and loved (emphasis added).”

In the Arabic version, the “believer” is the “mu’min” — an Islamic term referring only to a believer in the rigid oneness of God with a rejection of the Trinity (Tawheed) and in Muhammad. Surah 24:62 states, “The believers (mu’min) are only those who believe in Allah and His Messenger … .”

Also, in the Arabic version, there is no mention of “sister” as the reference here is to the Muslim community (ummah) and not to the universal fraternity of all who believe in a generic God.

Again, while the declaration states: “In the name of God who has created all human beings equal in rights, duties and dignity, and who has called them to live together as brothers and sisters, to fill the earth,” the converts maintain that in the Arabic version “equality” is not attributed to “human beings” but refers instead to other “beings,” termed “creatures.”

In Christian anthropology, humans are created in God’s image and called to share God’s life. Both of these notions are anathema to Islam, which considers them blasphemous.

“This is a critical distinction since in Islam there is no equality among human beings. Non-Muslims are not equal to Muslims, nor are women equal to men,” a convert who practiced Islamic jurisprudence in an Arab country told Church Militant.

“‘Creation’ in the Koran is different from creation in the Bible,” he said. “The term ‘God’ in English is generic, but in the Arabic version, the focus is on the Islamic God who created (a) human beings, (b) the universe and (c) other beings, termed ‘creatures’ — which, in Islam, also includes all non-human beings, i.e., animals, the jinn (supernatural spirits below the level of angels and demons), and satanic beings.”

The Sharia scholar further observes that in the Arabic version the term for “God” in the opening sentence of the declaration is Bismillah ( باسمِ الله), which excludes all other understandings of God. It also imposes the Islamic concept of Tawheed and the rule of Allah.

“The rest of the text of this quotation is based on Surah 49:13, ‘O mankind, indeed we have created you from male and female and made you peoples and tribes that you may know one another. Indeed, the most noble of you in the sight of Allah is the most pious of you … .’ Implicitly, this applies to Muslims only,” he explains.

“This fitrah is an Islamic doctrine that states that all humans are created ‘Muslims,’ i.e., the DNA of every human is Islam, as per Surah 30:30, ‘So direct your face toward the religion (Islam), inclining to truth. [Adhere to] the fitrah of Allah upon which He has created [all] mankind … .” the expert underscores….