May 28, 2020 John
DEEP STATE “CONTACT TRACING”
TO END PRIVACY
In this episode of Behind the Deep State, host Alex Newman exposes the Deep State organizations and individuals working to shred privacy and invade your home with so-called “contact tracing.” From HR 6666 and phone apps for tracking you to microchips under the skin for children and home visits splitting up families, the agenda is totalitarian to the core. And yet, with very little resistance, this scheme is moving forward at the state and even global level under the World Health Organization. Clinton, Soros, Gates, and other globalist Deep Staters are involved. Humanity must resist to stay free. ▶️ More Videos: Bill Gates: Globalist Technocrat to “Save” You With Mandatory Vaccines? https://youtu.be/2YB1eAJtDEw Fighting Coronavirus With Tyranny & Globalism https://youtu.be/yU_vKl5LnU8 Deep State Weaponizing Coronavirus Against Freedom https://youtu.be/NCOMBWlYyr8 📰 Read Alex’s Full Article: https://bit.ly/contact-tracing-article 🇺🇸 The New American: http://www.thenewamerican.com/ 📲 Let’s Connect! http://www.facebook.com/TheNewAmerican https://twitter.com/NewAmericanMag https://www.instagram.com/newamerican… #ContactTracing #AlexNewman

May 28, 2020 John
ISLAMIC REPUBLIC OF IRAN:
FATHER BEHEADS HIS 13 YEAR OLD DAUGHTER IN HONOR KILLING
BY ROBERT SPENCER
SEE: https://www.jihadwatch.org/2020/05/islamic-republic-of-iran-father-beheads-his-13-year-old-daughter-in-honor-killing;
According to Islamic law, “retaliation is obligatory against anyone who kills a human being purely intentionally and without right.” However, “not subject to retaliation” is “a father or mother (or their fathers or mothers) for killing their offspring, or offspring’s offspring.” (Reliance of the Traveller o1.1-2). In other words, someone who kills his child incurs no legal penalty under Islamic law. In this case the victim was the murderer’s daughter, a victim to the culture of violence and intimidation that such laws help create.
Muslims commit 91 percent of honor killings worldwide. The Palestinian Authority gives pardons or suspended sentences for honor murders. Iraqi women have asked for tougher sentences for Islamic honor murderers, who get off lightly now. Syria in 2009 scrapped a law limiting the length of sentences for honor killings, but “the new law says a man can still benefit from extenuating circumstances in crimes of passion or honour ‘provided he serves a prison term of no less than two years in the case of killing.’” And in 2003 the Jordanian Parliament voted down on Islamic grounds a provision designed to stiffen penalties for honor killings. Al-Jazeera reported that “Islamists and conservatives said the laws violated religious traditions and would destroy families and values.”
Until the encouragement Islamic law gives to honor killing is acknowledged and confronted, more women will suffer. 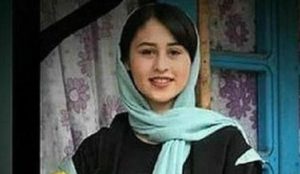 “Girl, 13, is ‘beheaded by her father while she slept in Iranian honour killing’: Victim ‘had fallen in love with an older man,’” by Alice Cachia, Mailonline, May 27, 2020 (thanks to Mick):

A 13-year-old Iranian girl has been beheaded in an honour killing by her father while she was sleeping, local media have claimed.
Romina Ashrafi was killed with a sickle in her family home in Hovigh, Talesh county, as a form of ‘punishment’, reports said.
She had planned to run away with an older man she had fallen in love with, Iran International TV said.
The teenage girl initially fled the family home with a 35-year-old man after her father expressed outrage at their plans to get married.
But both of their families contacted authorities, leading security forces to conduct a hunt before detaining the couple and taking Romina home.
Local media reported that although Romina told authorities she would be in danger at home and feared for her life, they handed her back as required by Islamic Republic laws.
After committing the murder, Romina’s father allegedly handed himself in to police and confessed to the crime – while still holding the bloodied murder weapon.
District governor Kazem Razmi said the girl’s father is being held in custody and an investigation into the case is underway….
Romina’s father will escape the death penalty because he was Romina’s ‘guardian’, and Islamic Penal Code means he is exempt from ‘qisas’, or ‘retaliation in kind’, Al Arabiya reported.
Sharia law says that only ‘blood owners’ – immediate family members – are allowed to demand execution for the murder of a relative.
It means most honour killings go unpunished since families tend not to demand the death sentence for another family member….
While the exact number of honour killings in Iran is not known, a Tehran police official has previously said they account for around 20 per cent of Iran’s murders.