May 26, 2020 John
GERMANY: CHURCH OPENS ITS DOORS
FOR MUSLIM PRAYERS
BY ROBERT SPENCER
SEE: https://www.jihadwatch.org/2020/05/germany-church-opens-its-doors-for-muslim-prayers;
“Even the church’s pastor took part in the service. ‘I gave a speech in German,’ said Monika Matthias. ‘And during prayer, I could only say yes, yes, yes, because we have the same concerns and we want to learn from you. And it is beautiful to feel that way about each other.’”
Did the Muslims actually say that they wanted to learn from the Christians? Or is Monika Matthias just assuming that her feelings are reciprocated? Given the supremacist contempt that the Qur’an inculcates for Christians, whom it terms “the most vile of created beings” (Qur’an 98:6), it is unlikely in the extreme that it is reciprocated. But anyone who notes that will be dismissed as “Islamophobic.”
In any case, this is wonderful. When will the imam of the mosque invite the Christians to come to the mosque and pray Christian prayers? Anyway, while we are waiting for that invitation, here are some more lovely and inspiring Qur’an selections that the Muslims at Martha Lutheran Church might have recited:
Qur’an 98:4-6: “Nor did those who were given the Scripture become divided until after there had come to them clear evidence. And they were not commanded except to worship Allah, [being] sincere to Him in religion, inclining to truth, and to establish prayer and to give zakah. And that is the correct religion. Indeed, they who disbelieved among the People of the Scripture and the polytheists will be in the fire of Hell, abiding eternally therein. Those are the worst of creatures.”
Qur’an 5:14: “And from those who say, ‘We are Christians’ We took their covenant; but they forgot a portion of that of which they were reminded. So We caused among them animosity and hatred until the Day of Resurrection. And Allah is going to inform them about what they used to do.”
Qur’an 5:17: “They have certainly disbelieved who say that Allah is Christ, the son of Mary. Say, ‘Then who could prevent Allah at all if He had intended to destroy Christ, the son of Mary, or his mother or everyone on the earth?’ And to Allah belongs the dominion of the heavens and the earth and whatever is between them. He creates what He wills, and Allah is over all things competent.”
Qur’an 4:157: “And [for] their saying, ‘Indeed, we have killed the Messiah, Jesus, the son of Mary, the messenger of Allah.’ And they did not kill him, nor did they crucify him; but [another] was made to resemble him to them. And indeed, those who differ over it are in doubt about it. They have no knowledge of it except the following of assumption. And they did not kill him, for certain.”
Qur’an 4:171: “O People of the Scripture, do not commit excess in your religion or say about Allah except the truth. The Messiah, Jesus, the son of Mary, was but a messenger of Allah and His word which He directed to Mary and a soul [created at a command] from Him. So believe in Allah and His messengers. And do not say, ‘Three’; desist – it is better for you. Indeed, Allah is but one God. Exalted is He above having a son. To Him belongs whatever is in the heavens and whatever is on the earth. And sufficient is Allah as Disposer of affairs.”
Qur’an 5:116: “And [beware the Day] when Allah will say, ‘O Jesus, Son of Mary, did you say to the people, “Take me and my mother as deities besides Allah?”‘ He will say, ‘Exalted are You! It was not for me to say that to which I have no right. If I had said it, You would have known it. You know what is within myself, and I do not know what is within Yourself. Indeed, it is You who is Knower of the unseen.’”
Qur’an 19:35: “It is not [befitting] for Allah to take a son; exalted is He! When He decrees an affair, He only says to it, ‘Be,’ and it is.”
Qur’an 9:30-31: “The Jews say, ‘Ezra is the son of Allah’; and the Christians say, ‘The Messiah is the son of Allah.’ That is their statement from their mouths; they imitate the saying of those who disbelieved [before them]. May Allah destroy them; how are they deluded? They have taken their scholars and monks as lords besides Allah, and [also] the Messiah, the son of Mary. And they were not commanded except to worship one God; there is no deity except Him. Exalted is He above whatever they associate with Him.”
Qur’an 9:29: “Fight those who do not believe in Allah or in the Last Day and who do not consider unlawful what Allah and His Messenger have made unlawful and who do not adopt the religion of truth from those who were given the Scripture – [fight] until they give the jizyah willingly while they are humbled.” 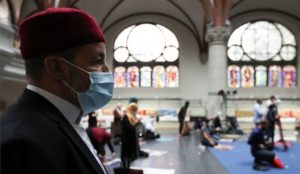 A church in Berlin has opened its doors to Muslim worshippers unable to fit into their mosque under new social distancing rules.
Germany allowed religious services to resume on 4 May but worshippers must maintain a distance of 1.5m (5ft).
As a result the Dar Assalam mosque in the city’s Neukölln district could only hold a fraction of its congregation.
But the Martha Lutheran church in Kreuzberg offered to help by hosting Friday prayers at the end of Ramadan….
“It is a great sign and it brings joy in Ramadan and joy amid this crisis,” the mosque’s imam told Reuters news agency. “This pandemic has made us a community. Crises bring people get together.”…
Even the church’s pastor took part in the service.
“I gave a speech in German,” said Monika Matthias. “And during prayer, I could only say yes, yes, yes, because we have the same concerns and we want to learn from you. And it is beautiful to feel that way about each other.”