KILLING FOR MUHAMMAD’S HONOR: THE HIGHEST EXPRESSION OF THE ISLAMIC FAITH 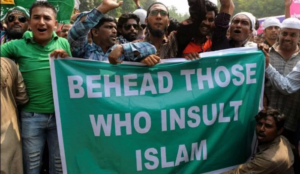 KILLING FOR MUHAMMAD’S HONOR: THE HIGHEST EXPRESSION OF THE ISLAMIC FAITH
BY DARRELL PACK
SEE: https://www.jihadwatch.org/2020/04/killing-for-muhammads-honor-the-highest-expression-of-the-islamic-faith;