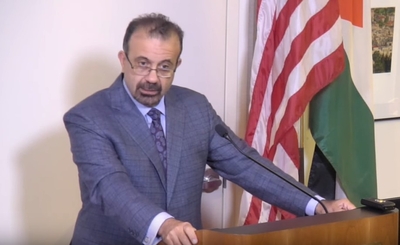 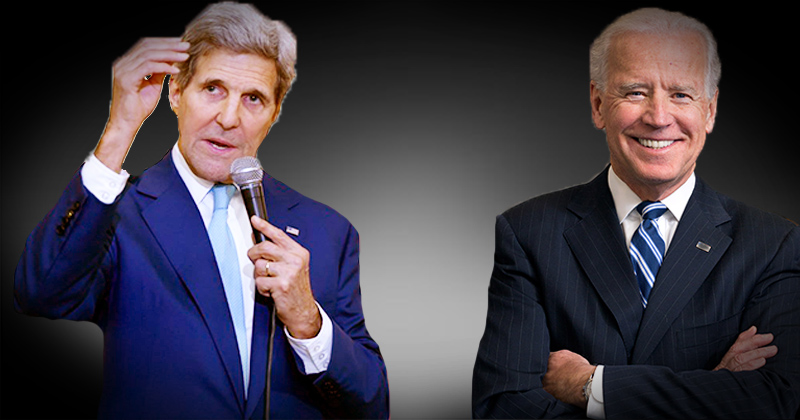 This describes the money transfer of
$14,655,982 and $366,015 EUR from “Wirelogic Technology AS”, and
$1,964,375 from “Digitex Organization LLP”.
Further, part of the sums described above were transferred to Alan Apter, Alexander Kwasniewski, Devon Archer and Hunter Biden.
— Michael Coudrey (@MichaelCoudrey) November 14, 2019

Burisma is said to have also funneled $3.5 million to the Bidens and Kerrys through U.S. megabank Morgan Stanley.

Rosemont Seneca Bohai LLC is owned and operated by Devon Archer, the Kerry Family including John Kerry Senior, John Kerry Junior, Heinz Jr and Hunter Biden.
All of whom are also listed as partners in the Rosemont Seneca Fund and other affiliated Rosemont Seneca companies.
— Michael Coudrey (@MichaelCoudrey) November 14, 2019

Following the series of financial transactions and a direct threat from then-U.S. Vice President Joe Biden, the Ukrainian investigation into Burisma was called off.
Joe Biden’s threat to withhold $1 billion in aid from Ukraine if they didn’t fire the investigator looking into Burisma’s evident corruption undoubtedly influenced the decision.

Why was a foreign company, that was being investigated by the Ukrainian General Prosecutor’s office for corruption, suddenly retain & solicit high profile US persons affiliated with government and pay them such large sums of money?
This is exactly why:https://t.co/g4vSzgRrga
— Michael Coudrey (@MichaelCoudrey) November 14, 2019

In conclusion, it is to the best of my knowledge determined a corrupt foreign gas company solicited high profile US persons affiliated with government to illegally influence official US Foreign Policy, & pressure the Ukrainian government to shut down its corruption investigation.
— Michael Coudrey (@MichaelCoudrey) November 14, 2019

Coudrey concluded his Twitter thread by providing a link to Rosemont Seneca Bohai’s bank records showing dozens of payments from Burisma Holdings and saying, “Joe Biden while the Vice President operated in an official capacity to change US Foreign Policy to help enrich and protect his son, Hunter Biden.”
The source documents were uploaded by Kenneth Vogel of The New York Times.

(Friday Church News Notes, November 15, 2019, www.wayoflife.org [email protected], 866-295-4143) – The following is excerpted from “Frequent pot smokers,”HealthDay News, Nov. 11, 2019: “Smoking pot doesn’t do your heart or your brain any favors, a pair of new studies shows. Frequent pot smokers are more than twice as likely to suffer a stroke compared with those who don’t partake, the first study found. They’re also more likely to be hospitalized for a dangerously erratic heart rhythm, according to the second study. Both studies are to be presented at an upcoming meeting of the American Heart Association (AHA), in Philadelphia, Nov. 16 to 18. Research presented at meetings is typically considered preliminary until published in a peer-reviewed journal. … The findings are ‘thought-provoking at a time when there is a great push to legalize marijuana, and the herb and its metabolites are being promoted as a cure-all for a myriad of medical conditions and ailments,’ said Dr. Ranjit Suri, an electrophysiologist at Mount Sinai St. Luke’s in New York City. Suri was not part of either study. The first study found that non-smokers who use marijuana more than 10 days a month are nearly 2.5 times more likely to have a stroke versus non-users. … The study team was surprised that people so young had such an elevated stroke risk, said lead author Tarang Parekh, a health policy researcher at George Mason University in Fairfax, Va. … In the second study, researchers found that people who compulsively use cannabis have an up to 50 percent greater risk of being hospitalized for  arrhythmia–an erratic heartbeat that can increase risk of stroke, heart attack or heart failure.”

CHINA’S NEW SUPER CAMERA CAN IDENTIFY A FACE AMONG THOUSANDS

(Friday Church News Notes, November 15, 2019, www.wayoflife.org [email protected], 866-295-4143) – The following is excerpted from “China’s New 500MP ‘Super Camera,” petapixel.com, Sep. 27, 2019: “Scientists at the Fudan University and Changchun Institute of Optics, Fine Mechanics and Physics in China have developed a 500MP cloud-connected ‘super camera’ that can reportedly pick out facial details of an individual person among thousands in a crowded stadium. The new tech is raising serious concerns about privacy and government monitoring. According to a report by ABC News, the camera was revealed at China’s International Industry Fair by Xiaoyang Zeng, one of the scientists who worked on the new system. The camera combines its 500MP resolution with a connection to the cloud and AI-powered, real-time facial recognition technology, making it possible to identify every individual in an ultra-wide image of a crowded stadium. As if that’s not enough, the camera can reportedly record video at the same resolution. The applications were put aptly enough by the China News Service, who writes that the ‘cloud-camera system [is] able to capture thousands of faces at a stadium in perfect detail and generate their facial data for the cloud while locating a particular target in an instant.’ According to the CNS report, the technology is being praised by ‘most Chinese experts’ for its potential ‘military, national defense, and public security applications,’ although ‘some’ have expressed concerns around privacy.”

(Friday Church News Notes, November 15, 2019, www.wayoflife.org [email protected], 866-295-4143) – Bethel Church is a former Assemblies of God church in Redding, California, that withdrew in 2005 to become a “nondenominational” charismatic network of churches and ministries. Bethel’s senior pastors are the husband/wife team Bill and Beni Johnson. Bethel Music publishes popular contemporary worship songs, promotes CCM tours worldwide, and operates WorshipU, an influential educational program. Bethel’s most famous musician is Jeremy Riddle, co-author of “This Is Amazing Grace.” The heretical emphasis is “encountering God” and “pursuing the presence of God” by means of releasing oneself to heavily sensual music. “At every service, our worship teams usher in the presence of God.” Bethel’s series “Without Words” uses instrumental music “to push the creative boundaries of worship.” There are no lyrics. Bethel’s “dance and flag ministry” also “reveals God’s heart with no words.” This is blind, emotional mysticism to feed the modern frenzy for “an experience.” It is open disobedience to the Bible’s command to “be sober, be vigilant” and is a perfect recipe for spiritual delusion. True spiritual edification requires a biblical message that is understood. This is the theme of 1 Corinthians 14, where “edify” is a synonym for “understanding.” “… except ye utter by the tongue words easy to be understood, how shall it be known what is spoken? for ye shall speak into the air. … I will sing with the spirit, and I will sing with the understanding also. … Let all things be done unto edifying” (1 Corinthians 14:9, 15, 26). Bethel Church also founded Jesus Culture, a contemporary, charismatic, ecumenical, music-oriented youth ministry that has its own Jesus Culture Music. Jesus Culture’s conferences are attended by tens of thousands. Bethel’s School of Supernatural Ministry has graduated 10,000 since 1998. “Students learn how to read, understand, and ‘do’ the Bible, how to practice His presence, to witness, heal the sick, prophesy, preach, pray, cast out demons and much more.” Bethel teaches and practices all sorts of charismatic heresies, such as the continuation of apostles and prophets, gibberish tongues, the promise of healing in the atonement, angelic and demon sightings, clairvoyance, grave soaking (lying on a grave to soak up the deceased’s “anointing”), and the appearance of “glory clouds,” gold dust, and angel “feathers.” Beni Johnson teaches that there are a variety of angels: messenger angels, healing angels, fiery angels.” She says that one of her students in the Supernatural School of Ministry was told by God to go to a chapel and shout “Wakey Wakey!” Suddenly, a huge angel stepped out and said, “I am the angel from the 1904 revival and you just woke me up.” When she asked, “Why have you been asleep?” the angel replied, “Because no one has been calling out for revival anymore.” On Nov. 6, 2019, Bill Johnson tweeted, “To raise a generation of powerful people, we must build trust. We must have the core belief that people are good.” In contrast, Jesus’ core belief is that “there is none good but one, that is, God” (Mark 10:18).

(Friday Church News Notes, November 15, 2019, www.wayoflife.org [email protected], 866-295-4143) – The following is excerpted from “Finnish Politician, Pastor’s Wife Accused,” Christian News Network, Nov. 5, 2019: “A lawmaker and pastor’s wife in Finland who was already being probed by police over a social media post in which she questioned the Evangelical Lutheran Church of Finland’s partnership with a Helsinki Pride event is now also facing a preliminary ‘incitement’ investigation over a booklet that she wrote 15 years ago entitled ‘Male and Female He Created Them.’ The Office of the Prosecutor General of Finland issued a press release on Monday noting that while Päivi Räsänen’s 2004 publication–which remains online–‘takes a stand on ecclesiastical policy, social policy, sexuality and marriage in regard to the Bible and its interpretation,’ Prosecutor Raija Toiviainen believes the text potentially constitutes a hate crime. … ‘According to the prosecutor general, there is reason to believe that because of the defamation of homosexuals by the violation of their human dignity, Ms. Räsänen is guilty of incitement to hatred against a group,’ it explains. ‘Therefore, there will be a preliminary investigation in this matter.” … As previously reported, Räsänen’s husband is a pastor with the Evangelical Lutheran Church of Finland, which is the largest denomination in the country, having an estimated three million members. … Räsänen is known for defending life and marriage, standing against abortion, euthanasia and homosexuality. … In June, Räsänen, a member of the Christian Democrat Party (which is different from the Democratic Party in the United States), also tweeted her views about the unscriptural advocacy. ‘How can the Church’s doctrinal foundation, the Bible, be compatible with the lifting up of shame and sin as a subject of pride? #LGBT #HelsinkiPride2019 #Romans 1:24-27,’ she wrote, while sharing a photograph of the biblical text, as it directly addresses homosexuality. However, in September, it was announced that Räsänen had been placed under government investigation for her post, being accused of ‘incitement against sexual and gender minorities.’ … She also told the Christian Broadcasting Network that she is ‘worried that this case, the criminal investigation, might frighten some Christians to hide and to keep silent.’ ‘[T]ruth usually comes with a price. One often has to pay for following truth, confessing truth and speaking it. Instead, however, people are tempted to sell the truth, to acquire advantage for oneself by yielding to popular, false ideas and by distorting the truth. Yet the Bible exhorts, Buy the truth, and do not sell it! Räsänen stated during a seminar in 2013, according to text posted to her website. … ‘If we neglect this right, the space for speaking will eventually get smaller. The more we keep silent about the teachings of the Bible on the painful issues of our time, the more powerful is the rejection. If there are not enough skiers on a ski track in a snowstorm, it gets difficult to proceed. We need people who ski before us.’”