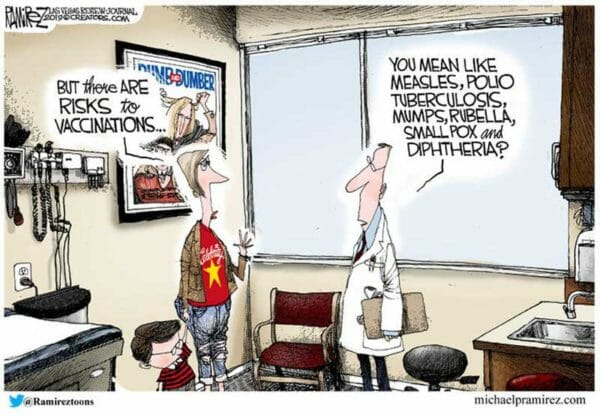 VACCINE MANDATES: IGNORING HUMAN RIGHTS & INFORMED CONSENT
BY Barbara Cáceres
SEE: https://thevaccinereaction.org/2019/03/vaccine-mandates-ignoring-human-rights-and-informed-consent/; republished below in full unedited for informational, educational and research purposes:
The U.S. Senate Health, Education, Labor and Pensions Committee held a hearing on Mar. 5, 2019 titled “Vaccines Save Lives: What is Driving Preventable Disease Outbreaks?”
The very title of the hearing tips the committee’s hand. “Vaccines save lives” is a conclusive statement that preemptively answers the question that follows, making it clear there would be no divergent exploration of the question of what is driving preventable disease outbreaks. Even further, while it is true that some vaccines may save some lives, it is also true that vaccines are not studied for their unintended long- and short-term effects on the body, and that many people’s bodies respond to vaccines in ways that prove harmful to them.
The National Vaccine Injury Compensation Program (VICP) has paid out more than $4 billion dollars for vaccine injuries since 1988.1 The passive reporting system for vaccine injuries, VAERS (Vaccine Adverse Event Reporting System), which captures between one and 10 percent of all adverse reactions,2 receives thousands of reports of injury every year.
If vaccines are saving lives, they are also doing it at the expense of those who are injured or killed by those same vaccines. Where is the “greater good” in that?
The testimonies of those elected to give witness in the Senate hearing all beat a predictable drum: more mandates for more vaccines to be given to more people. There was a push to curtail parental rights and eliminate vaccine exemptions to those vaccines. Who will be allowed to speak in Congress to the issue of human rights, the ethic of medical informed consent, and the right to bodily integrity and autonomy when it comes to vaccine mandates? The United States has confronted and repudiated the ugliness that comes with eugenics, utilitarianism, and medical experimentation in the labs at Tuskegee and the courts of Nuremberg following the horrors of Nazi medical experimentation on human subjects.
It is a violation of human rights to use people as guinea pigs in the great vaccine experiment, and it is immoral for the government to collude with the pharmaceutical companies through the use of vaccine mandates.
The Centers for Disease Control and Prevention (CDC) now recommends 69 doses of 16 vaccines be given to children before age 18, with hundreds of vaccines in the pipeline. Many of these vaccines are fast-tracked for approval without adequate safety studies, and each carries both known and unknown risks. Although it is currently in fashion to think otherwise, the science is not settled on vaccines. There is not adequate testing on vaccines to make assurances of safety (new vaccines are usually tested against other vaccines, not inert placebos), and there has never been a true scientifically credible study of those who are vaccinated compared to those who are completely unvaccinated.
Vaccines are a medical intervention given to healthy people that carry a risk of death and serious or debilitating consequences for some individuals. Because of this risk, there must always be choice!
There was no one on the panel of witnesses at the Mar. 5 Senate hearing who gave a voice to that point of view. Why was Barbara Loe Fisher of the National Vaccine Information Center (NVIC), a longtime advocate of vaccine safety and an expert on vaccine policy and informed consent, not called to testify? Why was a high school student who has spoken with friends and done a bit of Google research asked to participate in a hearing of such serious magnitude when parents of vaccine injured children—people who vaccinated their children in good faith and paid a horrible price—have been left out of the conversation?
If we applaud this child’s right to make medical choices, shouldn’t the choice of informed parents who have come to a different conclusion also be included? Are we abandoning the fundamental American value of intelligent dissent in favor of totalitarianism?
It’s hard not to conclude that this hearing was set up as a one-sided, unfair and incomplete conversation with a pre-determined outcome. Shame.
I will close with the words of Dr. Christine Stabell Benn, a vaccine researcher and Professor of Global Health at the University of Southern Denmark. Dr. Benn’s opinion was published in The Times of London on Mar. 2, 2019 in response to a previous article about vaccine hesitancy…

As a vaccine researcher, I strongly oppose mandatory vaccination. The vaccines that are in use were only tested for effects on the vaccine-targeted disease and on side effects in relation to the vaccination. However, there is increasing evidence that vaccines also affect the immune system broadly, reducing or enhancing susceptibility to unrelated diseases. Hence, the vaccine skeptics have a right to point out that we do not know the full effects of vaccines on overall health. It should therefore be a human right to weigh pros, cons and unknowns to make one’s own decision.3

SEE: https://thevaccinereaction.org/2019/03/sen-rand-paul-favors-liberty-over-vaccine-mandates/; republished below in full unedited for informational, educational and research purposes:
U.S. Senator Rand Paul of Kentucky expressed his opposition to government mandates forcing people to vaccinate themselves and their children. At a hearing of the Senate Health, Education, Labor and Pensions Committee on Mar. 5, 2019, he was the only Senator or invited witness at the hearing who made a statement urging caution about the creation of vaccine laws that contain no personal belief exemptions.
Sen. Paul said, “As we contemplate forcing parents, I think it’s important to remember that force is not consistent with the American story. Nor is force consistent with the liberty our forefathers sought when they came to America.”1 2
Sen. Paul, who is a medical doctor, noted that vaccines come with some risk and that at least for that reason people should have a choice as to whether to be vaccinated. He noted, “It is wrong to say that there are no risks to vaccines. Even the government admits that children are sometimes injured by vaccines.” Since the federal Vaccine Injury Compensation Program (VICP) created by Congress under the 1986 National Childhood Vaccine Injury Act (NCVIA) began operating in 1988, more than $4 billion has been paid to vaccine victims by the government.1 2
Sen. Paul appeared concerned about the relative lack of informed consent accorded to parents when it comes to vaccinating their children. He said, “Despite the government admitting to paying $4 billion for vaccine injuries, no informed consent is used or required when you vaccinate your child. This may be the only medical procedure in today’s medical world where an informed consent is not required.”1
One of the problems Sen. Paul sees with government mandates with regard to childhood vaccines such as the MMR (measles, mumps and rubella) is the precedence they set for other vaccines. “Are we to find that next we’ll be mandating flu vaccines?” asked Paul.”1 He warned:

I would guess that those who want to mandate measles [vaccine] will be after us on the flu next. Yet, the current science only allows for educated guessing when it comes to the flu vaccine. Each year, before that year’s flu strain is known, scientists put their best guess into that year’s vaccine. Some years it’s completely wrong. We vaccinate for the wrong strain of flu… Yet, five states already mandate flu vaccines. Is it really appropriate to mandate a vaccine that, more often than not, vaccinates for the wrong flu strain?1

The establishment is fomenting a major battle of the vaccination debate