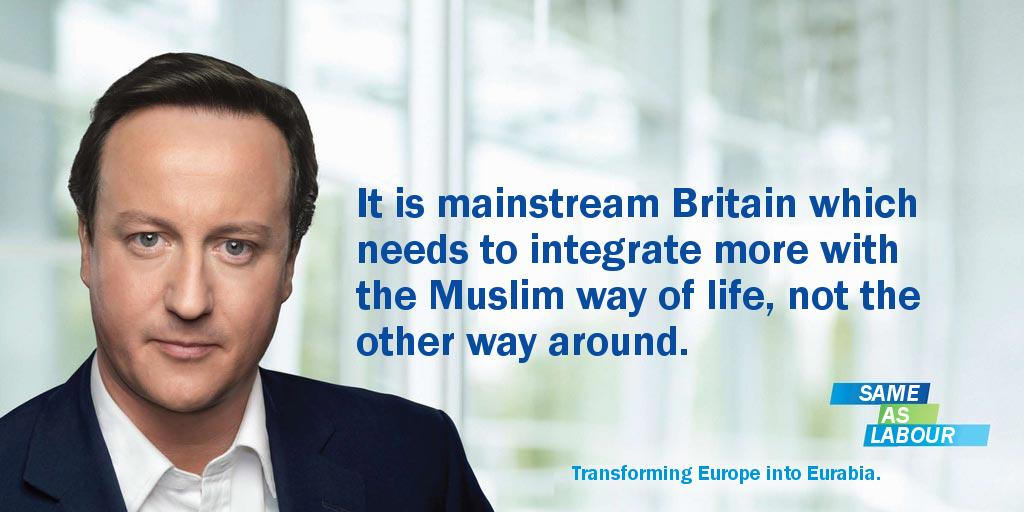 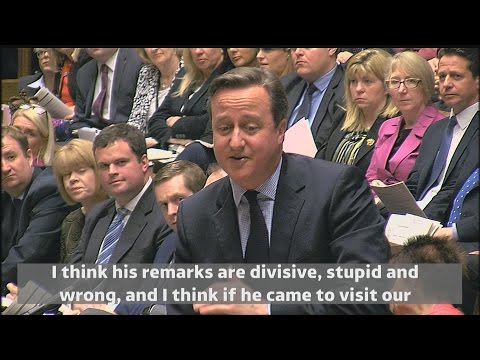 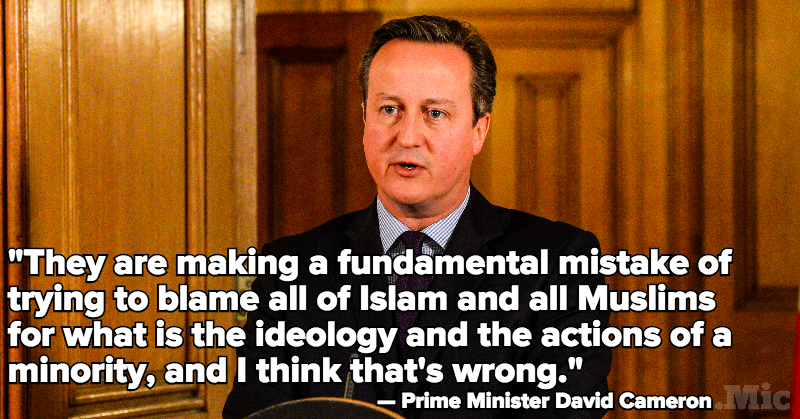 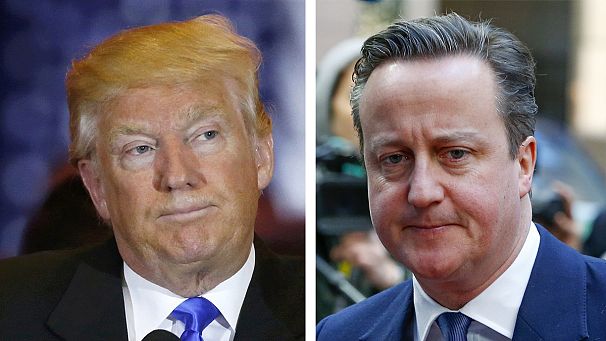 FORMER UK PM DAVID CAMERON LECTURES DONALD TRUMP: IT IS “WRONG TO PROJECT TERRORISM AS CHRISTIANITY-ISLAM CLASH”
BY CHRISTINE DOUGLASS-WILLIAMS
SEE: https://www.jihadwatch.org/2018/07/former-uk-pm-david-cameron-lectures-donald-trump-it-is-wrong-to-project-terrorism-as-christianity-islam-clash; republished below in full unedited for informational, educational and research purposes:
Former British prime minister David Cameron said today it was wrong to project terrorism as a clash between Christianity and Islam and called for a strategy to wipe out the extremist forces.
Cameron was pontificating to Donald Trump, since it “appeared to him from US President Donald Trump’s comments that he viewed terrorism as a clash between Christianity and Islam.” This is the extent of Cameron’s strange allegation against Trump: that it “appeared to him”; he couldn’t point to anything Trump has actually said in order to substantiate his claim.
Despite what might appear to Cameron, like it or not, the global jihad is in part focused upon subjugating Judeo-Christian democracies under the hegemony of Islamic law. Islamic expansionists have declared war on Christianity, on apostates, on Israel, on Zionists, and indeed on every religion and doctrine that does not align with the Sharia.
If Cameron is looking for someone to whom to direct his advice, it should be Turkish President Recep Tayyip Erdogan, who — in his quest to revive the Ottoman Empire — has in fact declared the “coming war between the cross and the crescent.” Erdogan has also meddled in Europe’s business, accusing the EU of starting “a new battle between Islam and Christianity following a ruling permitting employers to ban headscarves.”
Cameron, meanwhile, has stated:
Islam is a religion, observed peacefully and devoutly by over a billion people. Islamist extremism is a political ideology, supported by a minority.  At the furthest end are those who back terrorism to promote their ultimate goal: an entire Islamist realm, governed by an interpretation of sharia.
Vast Christian persecution, the murder of apostates, the content of the Islamic fiqh, the supremacist foundation of the Sharia, and the expansionist goals of the Organization of Islamic Cooperation and the Muslim Brotherhood all seem to have escaped the attention of David Cameron.
Cameron’s attempts to enhance his stature by playing both sides of the political divide is worsening his already degraded reputation. While he defends Islamic doctrine, he has also warned about “swarms of migrants” and about immigration threatening the UK’s future. Cameron has already earned himself the reputation of being “a historic and disastrous failure.” He is no one to be advising Trump. 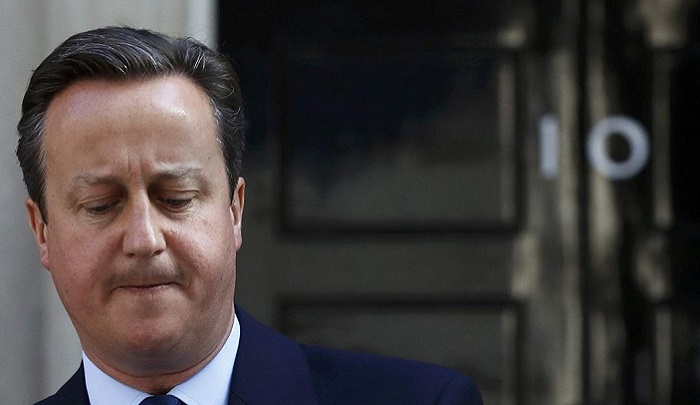 Former British prime minister David Cameron said today it was wrong to project terrorism as a clash between Christianity and Islam and called for a strategy to wipe out the extremist forces.
Cameron, the Conservative Party leader who was the prime minister of Britain from 2010 to 2016, said it appeared to him from US President Donald Trump’s comments that he viewed terrorism as a clash between Christianity and Islam.
“Listening to Trump makes me feel that it is a clash between Christianity and Islam. It is wrong,” Cameron said at an interactive session organised by the Indian Chamber of Commerce (ICC) here.
According to Cameron, it was, indeed, a clash within Islam – between the civilised ones who want to practice their faith peacefully and those who had taken a radicalised and perverted view of the religion.
The former British prime minister said: “Terrorism did not surface only in the Middle East. It also surfaced in Afghanistan, Pakistan and even in India and Britain”….

PRESBYTERIAN CHURCH USA CONDEMNS ALL “RELIGIOUSLY INSPIRED VIOLENCE”,
IGNORES JIHAD VIOLENCE
BY MATEEN ELASS
SEE: https://www.jihadwatch.org/2018/07/presbyterian-church-usa-condemns-all-religiously-inspired-violence-ignores-jihad-violence;
republished below in full unedited for informational, educational and research purposes:
The 223rd General Assembly of the Presbyterian Church USA met last month in St. Louis. As I reported in a previous blog, one of the overtures of particular interest to me on their agenda dealt with interfaith relations. Known as Overture 7-1, it was approved as amended by the General Assembly on Wednesday, June 20th. Among the seven directives of this overture was number 2, the final version of which reads: “Condemn all religiously inspired and motivated violence, prejudice, discrimination, and hate speech.” As I commented in the earlier blog, passage of this overture would keep the PCUSA extremely busy, especially with regard to the actions of the Islamic world. Perhaps the denomination will open up a new ministry dedicated to this new directive, appropriately named the Office of Condemnation.
It has been almost a month since the close of the General Assembly, and I have checked the official news organizations of the PCUSA to track the denomination’s obedience to this new directive. As of yet, there have been no condemnations of religiously inspired and motivated violence, violence, prejudice, discrimination, and hate speech. That does not mean, of course, that such things have not occurred around the world, just that the PCUSA is not attuned to obvious existence, especially with regard to the Muslim world. To be of help, I have cataloged a representative sample of the types of activities since June 20th which should have triggered an official PCUSA response:
Discrimination:
Hate Speech:
Prejudice:
Violence:
As I indicated above, all of these events by no means exhaust the list of violence, prejudice, discrimination and hate speech fomented by members of the Muslim world in the name of Islam over the last thirty days. Why do we see such a disproportionate amount of hatred and violence perpetrated by Muslims against others? The answer is that violence and hatred against unbelievers and “unfaithful Muslims” are endorsed by Allah and his messenger in Islam’s holiest revelatory sources. Though the average Muslim today rejects these commands to hatred and violence, those who are most zealous for a return to the Islam of Muhammad believe that the path of violent jihad is the way to Allah’s blessing.
Read the rest here.
______________________________________________________________
SEE ALSO:
https://mateenelass.wordpress.com/2018/07/18/should-the-pcusa-open-an-office-of-condemnation/
https://www.jihadwatch.org/2018/06/presbyterian-church-usa-poised-to-condemn-islam-muhammad-and-the-quran