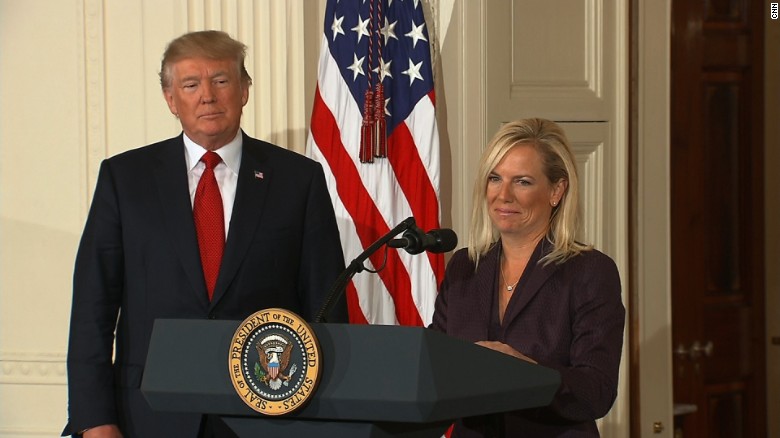 So-called “sanctuary cities” are reportedly among the states and localities awarded $1.7 billion in grants by President Trump’s homeland security secretary.
Three unidentified sources told McClatchy that multiple sanctuary cities were awarded grants, a move that goes against Trump’s repeated promises to cut off funding to those cities, which offer protections to undocumented immigrants and refuse to cooperate with federal immigration authorities.
McClatchy reported that Department of Homeland Security (DHS) Secretary Kirstjen Nielsen approved the grants, defying objections from other top agency officials.
“This is typical of Nielsen,” one source told McClatchy. “She is known for deliberately ignoring warnings that her decisions are not in keeping with the president’s agenda, but that she proceeds forcefully and simply misrepresents what she is doing.”
Read more

BY JOHN BINDER
SEE: http://www.breitbart.com/big-government/2018/05/25/dhs-secretary-nielsen-approves-15k-additional-h-2b-foreign-workers-to-take-blue-collar-u-s-jobs/; republished below in full unedited for informational, educational, and research purposes:

Every year, the U.S. companies are allowed to import 66,000 low-skilled H-2B foreign workers to take blue-collar, nonagricultural jobs. The H-2B visa program is used by businesses to bring in cheaper, foreign workers and has contributed to Americans having their wages undercut.
After staunch lobbying from the big business lobby and business-first Republican lawmakers, Nielsen announced the decision in a statement, justifying the importation of more foreign workers as a necessity in order to help businesses that are “at risk of failing.”
Nielsen said:

The limitations on H-2B visas were originally meant to protect American workers, but when we enter a situation where the program unintentionally harms American businesses it needs to be reformed.
I call on Congress to pass much needed reforms of the program and to expressly set the number of H-2B visas in statute.  We are once again in a situation where Congress has passed the buck and turned a decision over to DHS that would be better situated with Congress, who knows the needs of the program.
As Secretary, I remain committed to protecting U.S. workers and strengthening the integrity of our lawful immigration system and look forward to working with Congress to do so.

Nielsen’s ability to expand the H-2B program is a gift to business provided in the 2018 omnibus by retiring House Speaker Paul Ryan.
The 2018 omnibus — like the 2017 omnibus — did not require legislators to vote for expanding the unpopular program. Instead, it allowed DHS to raise the caps.

Businesses across the country are using the H-2B visa in order to import a foreign workforce that is much cheaper to employ.

Twitter Ads info and privacy
The decision to bring more low-skilled foreign workers to the U.S. undermines President Trump’s “Buy American, Hire American” executive order. This is now the second consecutive year that DHS has caved to the big business lobby and allowed 15,000 foreign workers to take U.S. jobs.
Though the business community — with the help of the establishment media — has relentlessly warned of so-called “labor shortages,” wage data analyzed by the Bureau of Labor Statistics, Center for Immigration Studies (CIS), and the Economic Policy Institute crushes these claims.
For example, data has shown that wages for Americans have actually declined in the majority of H-2B visa occupations. Researchers say the H-2B visa program allows businesses to keep a steady stream of cheap, foreign workers in order to avoid raising U.S. wages and recruiting Americans for the blue-collar jobs.

SOUTHERN BAPTISTS CUT TIES WITH WASHINGTON, D.C. BAPTISTS OVER HOMOSEXUALITY
BY DAVE BOHON
SEE: https://www.thenewamerican.com/culture/faith-and-morals/item/29153-southern-baptists-cut-ties-with-dc-baptists-over-homosexuality; republished below in full unedited for informational, educational, and research purposes:
The Southern Baptist Convention (SBC), the nation’s largest evangelical denomination, has severed ties with the District of Columbia Baptist Convention (DCBC), after the Washington, D.C. church group refused to discipline a church under its jurisdiction that had hired a pair of lesbian co-pastors.
In February the SBC’s Executive Committee issued the DCBC a 90-day ultimatum to remove all congregations in its fellowship that “practice affirming, approving, or endorsing homosexual behavior,” according to Baptist Press News (BP News). The action came after one of the DCBC’s member congregations, Calvary Baptist Church in Washington, D.C., voted in January 2017 to call a “married” lesbian couple co-pastors.
Calvary, a 155-year-old congregation founded by abolitionists, had disassociated from the SBC in 2012, but was still part of the DCBC. But when the church called lesbian partners Maria Swearingen and Sally Sarratt co-pastors in 2017, the SBC’s Executive Committee charged that by failing to discipline the congregation, the DCBC had tacitly approved of the unbiblical actions of Calvary.
After the DCBC failed to comply with the SBC’s warning as of May 21, the SBC severed its relationship with the group. “The formal relationship between the SBC and the DCBC has come to an end,” said D. August Boto, the SBC’s Executive Committee president, in a prepared statement. Boto told BP News that he had received a letter from DCBC executive director Robert Cochran “indicating that the DCBC has not taken action the Executive Committee hoped it would when it issued its Feb. 20 decision. In his letter, Cochran divulged that he anticipated an end to our relationship.”
Boto recounted that upon receiving Cochran’s response, he “issued a letter to the DCBC on behalf of the [SBC Executive Committee]…. I will soon send another letter to each of eight churches we know of in DC that are supporting SBC work through financial gifts directed through the DCBC. The letters will inform each group that the formal relationship between the SBC and the DCBC has come to an end and that … the SBC no longer recognizes the District of Columbia Baptist Convention as a Baptist body authorized to receive and disburse Cooperative Program and other SBC contributions.”
Boto said that the SBC’s Executive Committee had “expressed deep regret over the need to take this action, but felt compelled to affirm biblical truth over organizational relationships.” He added that the committee embraced a “willingness to consider resuming its relationship with the DCBC in the future,” should the group act to remove Calvary Baptist from its fellowship.
However, while Cochran had earlier emphasized that the DCBC “has not affirmed, approved, or endorsed homosexual behavior in any way at any time,” and that it “respects the official statements” on homosexuality by the SBC, he made it clear that his group had “no plans to disassociate” with Calvary Baptist Church, and had not discussed “the issue of homosexuality” with Calvary Baptist leadership.
______________________________________________________________
SEE OUR PREVIOUS POST:

ONE CAME FROM A UNITARIAN UNIVERSALIST “CHURCH”

The European Union political establishment, allied with Pope Francis & the Vatican, have overthrown democracy in Italy. Leo Zagami reports from Italy on how this happened and what is likely to happen next. 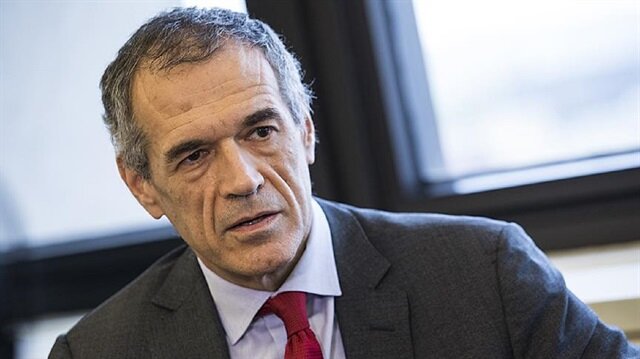 BY CHRISTINE DOUGLASS-WILLIAMS
SEE: https://www.jihadwatch.org/2018/05/italys-president-sabotages-popular-anti-muslim-migration-euroceptic-coalition;
republished below in full unedited for informational, educational, and research purposes:
“Italian President Sergio Mattarella announced his rejection of Italy’s populist coalition government.” His move is being interpreted as “a rejection not only of the government but of the national will as expressed in democratic elections.”
Mattarella has now nominated Carlo Cottarelli, an International Monetary Fund former official, to form an interim government.
The battle is on in Italy, just as it is elsewhere against globalist leaders who continue to violate the principles of democratic rule and the will of the people in order to force people to accept mass Muslim migration. Right before last Christmas, the Organization of Islamic Cooperation released a statement claiming that Europe needs mass Muslim migration to pay its pensions. United Nations Secretary General António Guterres also unveiled his plan to promote global mass migration.
Less than two weeks ago, Jihad Watch reported about Italy’s new coalition’s plan to deport 500,000 migrants.

In the March 4th national elections, Italians voted overwhelmingly for anti-establishment parties, with the Five-Star Movement taking the largest share, followed by the eurosceptic and anti-mass immigration League.

Italian President Sergio Mattarella has now sabotaged plans for the new coalition government, leading to calls for his impeachment, while leaders of Five-Star and League are reportedly organizing rallies in Italy, ahead of fresh elections either in the Fall or early new year. 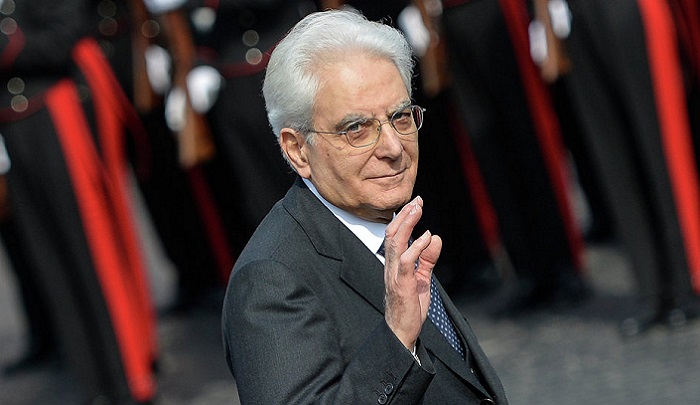 Italian President Sergio Mattarella announced his rejection of Italy’s populist coalition government Sunday evening in what is being billed as one of the worst days in Italian political history.
Mattarella’s move is being widely interpreted as a rejection not only of the government but of the national will as expressed in democratic elections, and massive demonstrations are expected Monday. The Italian president was reportedly under heavy pressure from Brussels, Berlin, and other centres of European power to abort the eurosceptic government, which they viewed as a threat to European stability.
In the March 4th national elections, Italians voted overwhelmingly for anti-establishment parties, with the Five-Star Movement taking the largest share, followed by the eurosceptic and anti-mass immigration League.
Since neither party had the necessary parliamentary seats to form a government, the leaders of the two groups — Five-Star’s Luigi Di Maio and League’s Matteo Salvini — worked together to form a coalition government, working through their differences and hammering out a 58-page unified political program last week…..

ITALY: The Election That Will CRASH THE EU

DONATE To Lisa Haven Via Patreon:

GET STARTED WITH NOBLE GOLD:

May 30, 2018 John
HEADS WILL ROLL UNDER SECOND SPECIAL COUNSEL INVESTIGATION
A resolution lead by Republican Congressman Lee Zeldan Called for Attorney General Jeff Sessions and Deputy Attorney General Rod Rosenstein to revisit the appointment of a second special counsel. Time has set the record straight and the laundry list of wrongdoing sits firmly with Hillary Clinton and Barack Obama.

The DOJ and the FBI’s abuse of the FISA process will be the target of a second special counsel. If the resolution passes, considering the monumental stack of evidence, heads will roll.