May 11, 2018 John
OVER 200 CONVICTED JIHADIS
TO BE RELEASED IN EUROPE
OVER THE NEXT TWO YEARS
BY ROBERT SPENCER
SEE: https://www.jihadwatch.org/2018/05/over-200-convicted-jihadis-to-be-released-in-europe-over-the-next-two-years; republished below in full unedited for informational, educational, and research purposes:
The defense against the global jihad is a war. Jihad attacks in the West are single battles in that war. Yet authorities continue to prosecute jihadis as if they were a series of criminals committing separate and discrete criminal acts that are unrelated to one another. If we had arrested and tried separately in criminal court every German and Japanese soldier captured during World War II, which side would have won that war? This myopia is self-defeating at best, and as the jihad continues, that will become increasingly obvious. One occasion of its becoming obvious will be when these jihadis are released. 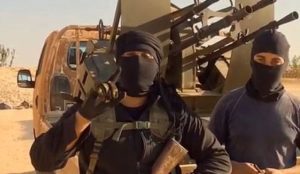 PARIS (AP) — Over the next two years, terrorism convicts will walk free from European prisons by the dozens — more than 200 inmates who largely formed the first wave of jihadis streaming to Syria and Iraq, dreaming of an Islamic caliphate not yet established.
In all, about 12,000 Europeans left to fight with the Islamic State group and al-Qaida beginning in 2011; about a third of those are now believed to be back home, mostly living freely. Some are awaiting trial, but most never even faced serious charges due to insufficient evidence.
And many more were thwarted from traveling to the war zone entirely, left to stew and, sometimes, plot at home.
How much of a threat do these avowed extremists living throughout Europe pose, and how equipped are authorities to deal with them? The tactics thus far have been, at best, improvised.
The impending releases of jihadi veterans could be considered “a fourth wave of returnees,” according to Rik Coolsaet, a scholar at Belgium’s Egmont Institute who has done extensive research on violent extremism.
“There are a number of personal frustrations and motivations that have pushed the kids in their journey to ISIS that we now have to address,” Coolsaet said. “If we don’t address it now, the environment will remain as conducive for this kind of jihadi violence.”
Farid Benyettou, a former influential crusader who has now publicly renounced extremism, fears Europe is not braced to cope with the hordes of believers roaming free.
Once nicknamed the “imam Voltaire” after the high school he left to become a backroom preacher to young Muslims in his Paris neighborhood, Benyettou has written a book detailing his descent into becoming a propagandist of Islamic extremism. He views the coming round of prison releases with an apprehension born of firsthand experience.
Benyettou, now 38, spent four years in prison on terrorism charges, alternating between recruiting fellow inmates to the cause and furiously studying for his degree. It took years for him to disavow the ideology he once spread so effectively. Now, he says extremism sows only death.
Among the group of young men he once led are Cherif and Said Kouachi, who gunned down 12 people at the offices of the satirical newspaper Charlie Hebdo in 2015. Another follower blew himself up in Iraq; yet another died in Syria fighting for the Islamic State group.
The cell he once led epitomizes the urgent question Europe now faces: Are the terrorism convicts on the verge of freedom like Benyettou, the Kouachis or somewhere in between?
“These guys who are convicted today or who are awaiting trial will get out one day,” Benyettou said in an interview with The Associated Press. “And that’s the issue, in fact: What kind of preparations will there be for their release?”
Terrorism prison sentences in Europe until very recently averaged about six years, compared to 13 years in the United States, according to data from Europol.
Since the Charlie Hebdo attacks, the sentences have crept up across the continent, but still remain well below U.S. levels.
“The danger is the risk of recidivism. We should not be too quick to believe certain terrorists who say they are repentant,” Catherine Champrenault, the Paris prosecutor general, said in a recent interview with the newspaper Le Monde….