May 11, 2018 John
LIVE FROM ISRAEL: LAURA LOOMER REPORTS ON IRAN’S MISSILE ATTACK
IN GOLAN HEIGHTS
Laura Loomer joins Alex Jones live via Skype from Israel where the night before she witnessed Iranian missile strikes in Golan Heights where Israel’s Iron Dome defense system shot them out of the sky.

BY ROBERT SPENCER
SEE: https://www.jihadwatch.org/2018/05/irans-islamic-revolutionary-guards-fires-rockets-into-golan-heights-israel-hits-iranian-military-in-syria; republished below in full unedited for informational, educational, and research purposes:
Anyone who thinks the Iran nuclear deal would have prevented the Islamic Republic of Iran from ultimately striking Israel is naive or self-deluded beyond redemption. This rocket fire into Israel, however, is likely to strengthen European dhimmi leaders’ resolve to keep the nuclear deal alive and appease the Iranian mullahs at all costs — not because they care if Israel is hit, but because they don’t want the mullahs to be angry. It’s bad for their business interests. 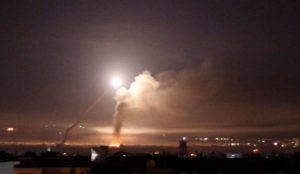 “Israel strikes Iranian targets in Syria in response to rocket fire,” BBC, May 10, 2018:

Israel says it has struck almost all of Iran’s military infrastructure in Syria, in response to an Iranian rocket attack on the occupied Golan Heights.
The Israeli military said 20 rockets were fired by Iranian Revolutionary Guards at its positions overnight.
It retaliated by targeting what it said were Iranian weapons depots, logistics sites and intelligence centres.
There was no immediate comment from Iran, which has sent troops to Syria to support President Bashar al-Assad.
Syrian state media reported that the army’s air defences had repelled an “Israeli aggression” on Syrian territory, shooting down scores of missiles.
But a military source told the official Sana news agency that some missiles had hit a number of air defence battalions, radars and an ammunition depot….