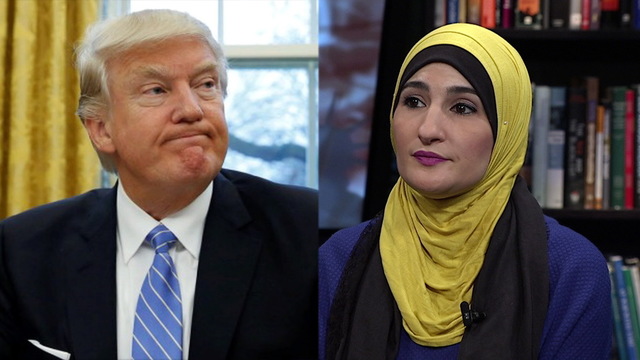 Linda Sarsour has renewed and revived her jihad against Trump and her veiled incitement to violence.

Two days after the executive order, I became the lead plaintiff in Sarsour vs. Donald J. Trump, a lawsuit filed by the Council on American-Islamic Relations against the Muslim ban based on Trump’s clear anti-Islam bias during his campaign.

The temporary ban was against countries of concern to minimize
threats to Americans from jihad attacks, violence and cultural practices
not fitting for any democracy; but Sarsour teamed up with CAIR to
present the ban as a victimization of Muslims. Jihad by immigration is
one form of conquest for Islamic supremacists. Trump’s ban stymies that
global objective.
Sarsour goes on:

Amidst the vitriol directed at me as a Palestinian
Muslim-American activist, the hardest thing for me as a mother has been
explaining to my beautiful, aware, Palestinian Muslim-American children
why the country they love is banning people who look like them and share
their faith from coming here.

Banning people “who look like them?” In terms of looks, how, pray
tell, can one definitively tell who is a Muslim Palestinian? In the case
of Sarsour herself, she once admitted that it was her hijab that transformed her from “some ordinary white girl in New York City” into a “person of color.”
The disturbing aspect to Sarsour’s words is that she has revealed
that her children (and likely others) are being taught the worst
propaganda against Americans. They’re being indoctrinated with hate,
which feeds jihadist sentiments. America is not anti-Muslim, which is
why mosques are everywhere and even free to preach the hate that has
been widely discovered in them.

There is a pattern to be observed in Sarsour’s message, reminiscent
of the indoctrination of Palestinian children against Israelis.

Palestinians are coaching children to value terrorism in its school curriculums by teaching hate and victimization; and they are taught to hate Israel in UN-funded camps.

And as reported by the New York Times, there are:

thousands of examples of Palestinian incitement against
the Jewish state and the Jewish people. There are even numerous
instances of the glorification of Hitler on the Facebook pages of some
government-supported Palestinian schools and in children’s publications
funded by the Palestinian Authority. Such messages, propagated daily in
P.A. media and classrooms, are internalized by the population at large —
and children in particular.

Sarsour plays the ultimate victim card as she issues her propagandist
call to uprising “shoulder to shoulder,” resembling a Palestinian
intifada in which the Palestinian people view themselves as oppressed
victims of Israel despite their repeated (and ongoing) attempts to
obliterate Israel:

There have been dark times like slavery, the treatment of
native Americans and the internment of Japanese Americans. During those
dark times, a silent majority turned a blind eye to grave injustice,
and we cannot let it happen again. Let us commit to standing shoulder to
shoulder against the coming storm. People are counting on us.

Arabs are still holding black slaves, wiping out Christianity in the
Middle East, throwing gays off the highest roof headfirst, murdering
apostates, infidels, minority groups and raping infidels. The usual list
goes on, while Sarsour and her ilk turn a blind eye to these grave
injustices and spread their propaganda, getting their water-carriers to
do the same. Linda Sarsour is stirring uprising against Trump and
against any movement that stands in the way of her Islamic supremacist
agenda.
“Linda Sarsour: Trump’s Anti-Muslim Rhetoric Helps Unite America Against Him”, by Linda Sarsour, Time, January 30, 2018:

It was almost a week after the 2017 Women’s March —
possibly the largest single-day protest in U.S. history — that President
Trump signed an executive order temporarily banning immigrants and
refugees from seven Muslim-majority countries. At the time, I was
sitting with friends in Los Angeles and found myself in tears. I
couldn’t believe it.
The new administration was wasting no time in keeping their campaign
promises to target the communities I love and belong to. Soon after the
executive order was signed, a tweet went out asking people to show up at
airports across the country in order to stand up against the order.
I went to Los Angeles International Airport and saw an image that
continues to fill my heart with hope — hundreds of people demanding
entry for Muslim immigrants and refugees from countries placed on the
travel ban. As a Muslim American who has been working to defend the
rights of Muslims in the post 9/11 era, this act of solidarity was
especially important and meaningful.
Two days after the executive order, I became the lead plaintiff in
Sarsour vs. Donald J. Trump, a lawsuit filed by the Council on
American-Islamic Relations against the Muslim ban based on Trump’s clear
anti-Islam bias during his campaign. We were not going to sit back. We
were going to organize and fight back regardless of the consequences.
Over the past year, this administration has put forth multiple
versions of the Muslim ban, worked to rescind the Deferred Action for
Childhood Arrivals, targeted undocumented immigrants in mass deportation
sweeps and employed manipulative, hateful rhetoric against our
communities. Their shameless use of the courts to defend what they know
is immoral and unconstitutional further shows their disregard for our
nation’s laws. It has been both a privilege and an inspiration to stand
with people resisting each effort, because behind the policy arguments
are real people whose lives are being upended.
Each Muslim ban has separated families, many of whom live in my
community in Bay Ridge, Brooklyn. I know Yemeni-American fathers who are
longing to see their children but are in visa limbo in countries like
Ethiopia, Egypt and Djibouti. Syrian refugees — who have already
suffered in the journey to leave their homes — have been further
separated from half of their families because of the ban.
As a result of my advocacy on behalf of Muslims and standing
unapologetically against this administration, I have been met with
vicious attacks, smear campaigns and death threats. Amidst the vitriol
directed at me as a Palestinian Muslim-American activist, the hardest
thing for me as a mother has been explaining to my beautiful, aware,
Palestinian Muslim-American children why the country they love is
banning people who look like them and share their faith from coming
here. How do I explain to teenagers why this administration has such
contempt for them and their faith? The key for them has been our friends
and their acts of solidarity, which have helped me and my children cope
with this pain and trauma.
Since the horrific attacks of 9/11, Muslims in America have been met
with racial and religious profiling by all levels of law enforcement.
We’ve endured unwarranted and blanket surveillance, deportations and
registration programs. We’ve also been erroneously placed on no-fly
lists and experienced an exponential rise in hate crimes against our
communities. We often found ourselves advocating in small groups, or
alone.
But over the last year, I felt a shift.
This year was the first time we saw allies mobilizing for Muslims and
fighting back against the racism and bigotry directed at us. My visible
participation in the Women’s March in 2017 and the very successful
anniversary earlier this month has been a heartwarming experience for
Muslims across the world. It was inspiring.
No matter how many Muslim bans or other ugly policies are introduced
by Trump and his administration, one thing is clear — when we fight
together, we win every time. Muslims cannot do this alone, and we should
not do it alone. I ask my fellow Americans not to be distracted and to
keep the focus on building power…

“We As Americans”: Linda Sarsour is Suing Trump Over ‘Muslim Ban’