H.R. MCMASTER’S “WILLFUL IGNORANCE” AND/OR “TREASONOUS COMPLICITY”?: STATES JIHAD TERRORISTS ARE “IRRELIGIOUS”~MOUNTAIN OF EVIDENCE AGAINST HIM

Taslima Nasrin Exclusive:
Islam Is Not A Religion Of Peace

BY ROBERT SPENCER
SEE: https://www.jihadwatch.org/2017/12/h-r-mcmaster-jihad-terrorists-are-irreligious;
Denial or willful ignorance? Why hasn’t this deluded clown been fired yet? Why was he hired in the first place? 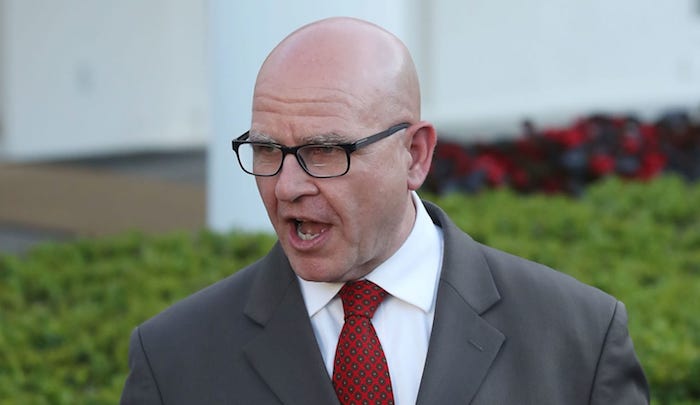 In a BBC radio interview posted online on Wednesday, McMaster was asked about the U.S. fight to rid the region of the Islamic State.

And so what has to happen is a removal of these drivers
of conflict. And that means defeating these jihadist terrorist
organizations so that they can’t come back. That means denying them
control of territory, populations, resources. Drying up their financing.
But then also defeating their wicked ideology to expose their ideology as irreligious and illegitimate. And then it also involves addressing Iran’s destabilizing behavior in the region.

The comments mark the latest time McMaster has downplayed or altogether denied the radical Islamic nature of Islamic terrorism.
In November, after Sayfullo Saipov plowed into a crowd of pedestrians
and bicyclists in Lower Manhattan, killing eight people, McMaster referred to the attack as among a grouping of “mass murderers.”
This despite reports  Saipov left behind a note declaring that the attack was perpetuated in the name of the Islamic State.  And witnesses heard Saipov shout “Allahu Akbar!,” Arabic for “Allah is great,” during the terrorist assault.  IS claimed responsibility for the attack.
One month earlier, McMaster labeled the September 11, 2001, Islamic terrorist attacks “mass murder attacks,” instead of calling them acts of terrorism.
This reporter previously exposed numerous other instances of McMaster minimizing the Islamic motivations of radical Muslim terrorists.
McMaster has reportedly previously petitioned against using the phrase “Islamic terrorism.”
In February, CNN cited
a source inside a National Security Council meeting quoting McMaster as
saying that use of the phrase “radical Islamic terrorism” is unhelpful
in working with allies to fight terrorism.
In May, McMaster spoke
on ABC’s This Week about whether Trump would use the phrase “radical
Islamic terrorism” in a speech that the president was about to give in
Saudi Arabia. “The president will call it whatever he wants to call it,”
McMaster said. “But I think it’s important that, whatever we call it,
we recognize that [extremists] are not religious people. And, in fact,
these enemies of all civilizations, what they want to do is to cloak
their criminal behavior under this false idea of some kind of religious
war.”…