December 20, 2017 John
U.K.’S CENSORSHIP OF “HATE SPEECH” & LACK OF FREE SPEECH RIGHTS COULD GET HIM ARRESTED AND/OR DEPORTED 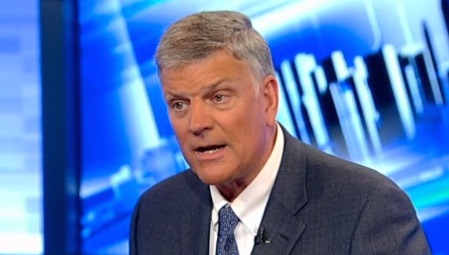 Thousands of U.K. residents have signed on to a Change.org petition
seeking to ban evangelist Franklin Graham from entering the United
Kingdom for a scheduled September 2018 Christian gospel crusade in
Blackpool, in northwest England.

More than 7,000 people have signed the petition so far, joining
members of the British parliament in demanding that Graham, the son of
iconic American evangelist Billy Graham and head of the Billy Graham Evangelistic Association,
be banned from the U.K. because of comments he has made calling
homosexuality sinful and Islam a potentially dangerous religious faith.
Those leading the petition drive charge that the comments violate U.K.
hate speech laws.
Initially launched by the Reverend Nina Parker, a female pastor in Blackpool, the Change.org petition
charges that “Franklin Graham supports a ban on all Muslims from
entering the United States while advocating that Muslims already in
living in the United States should be interned.”

Additionally, the petition alleges that Graham “has said that Russian
President Vladimir Putin ‘is right’ in his crackdown against LGBT
rights in his country where gay people are subject to severe human
rights abuses. Atrocities and executions of gay people continue to go on
in the Russian republic of Chechyna with no intervention from the
Russian authorities. Franklin Graham has stated that gay children and
gay people are dangerous and should not be allowed into churches or
Christian homes.”
The virulently worded petition goes on to charge that, unlike his
famous father, “Franklin Graham engages in outspoken bigotry targeting
refugees, Muslims, and LGBT people. His father promoted unity and
respect in communities, but Franklin Graham’s extreme views promote
prejudice and division.”
Noting that religious leaders in Norway and Canada are protesting
Graham’s scheduled speaking engagements in their countries, the petition
insists that speech “likely to promote prejudice and hatred is grounds
for the government to refuse a visa. Help us stop this man getting a
visa to come here to spread his hatred.”
Commenting on her motivation for the petition drive, Parker told the online Huffington Post
that allowing Graham into the U.K. for his Christian gospel event “will
give oxygen to those who hate, as they will be aware of hatred being
expressed by a man of high status in the Church. It will portray a Trump
style, hard line, hate filled version of Christianity devoid of
understanding of and acceptance of ordinary people. It will destroy the
reputation of Christianity in this region as it will be assumed that
this man speaks for all. It will bring Christians into disrepute.”
Gordon Marsden, a member of Parliament who is part of the petition
drive, said in an interview in November that “as a Christian, I have my
own views on people who claim the authority of God and Jesus and then
advocate attitudes which appear to be poles apart from what we’re told
about in the Gospel.”
He added that “as a member of Parliament … I have to be concerned
about where extreme fundamentalism and where speech or opinions that
might stir up hatred against groups of people goes. I think frankly the
evidence is piling up that his visit to the UK, and certainly to
Blackpool and Lancashire, would not be a good thing and not probably, in
my view, a very a Christian thing.”
In response to the petition drive and efforts to stop the
organization’s Blackpool Christian event, the Billy Graham Evangelistic
Association released a statement emphasizing that the scheduled crusade
“will be a positive and encouraging event with music and also a message
from Franklin Graham about the hope that can be found through a
relationship with Jesus Christ. It will be free and everyone is invited
to attend.”
LifeSiteNews.com noted that the efforts to ban Franklin Graham from
the U.K. “contrasts sharply with the welcome his father Billy Graham
received when he arrived in the UK in 1954. Between 1.5 and 2 million
people in total turned out to the mass gatherings of the elder Graham’s
‘London Crusade.’”
Contrasting the effort to ban Graham, supporters of the evangelist and global Christian humanitarian have launched their own Change.org petition drive, asking individuals to help ensure that the Franklin Graham evangelistic event goes forward as planned in Blackpool.
“Franklin Graham …  is due to come to England to preach,” reads the
petition. “He’s following in his fathers footsteps in preaching the
whole gospel in a clear way, sticking to biblical truths. Let’s stop the
tide opposing him from coming here!”
_____________________________________________________

British Christian publications have been wondering if we are
witnessing the “extinction of Christianity in Egypt”, where the
Christian faithful have suffered persecution and terror attacks at the
hands of Islamic fundamentalists. Christian leaders also seem to be
wondering if Christianity will be “extinct within a generation” in the
UK, where religious people enjoy total freedom of worship and faith.

Last year, the Church of England began to formulate a religious
revolution. Its canonical laws require that British churches hold their
functions every Sunday. The dramatic crisis of Christianity in the UK,
however, is pushing the Anglican church to rewrite those rules, in order
not to officiate in empty and abandoned churches.

A quarter of the British rural parishes now have fewer than 10
regular members of the faithful on Sunday. There are no more children in
25% of the Church of England’s congregations, as new figures have just
shown. On average, nine children attended each church service across all
Anglican churches in 2016. Generally speaking, churchgoers have
dwindled in the UK by 34,000 in just one year.

“Should we care that Britain’s lost its religion?”, Daniel
Finkelstein asked in The Times. Yes. He suggests that nationalism might
take its place, but what if, instead, its place is taken by another
religion?

There is no need to be observant to understand the importance of a
country’s cultural affiliation. If there were no mass immigration from
countries with values antithetical to Western ones, the demise of
Christianity would not be as potentially calamitous; society might
simply become one of atheists and secularists.

Europe now, however, is experiencing a terminal decline for two
reasons that are linked: mass unvetted immigration coupled with a
shrinking confidence in its own legitimacy and beliefs. There seems to
be shame over Western colonialism, yet no thought at all seems to be
given to who are the real colonists: The Crusades were a reaction to a
Muslim colonization of the Christian Byzantine Empire, North Africa, the
Middle East, much of Eastern Europe, Northern Cyprus and Spain.

In Europe, the UK is now leading the same process. Britain is living
through “the biggest religious transition since the Reformation of the
16th Century”, according to Linda Woodhead, professor of the sociology
of religion at Lancaster University. In 2000, Anglicans were 30% of the
population.

Half of them have disappeared in just seventeen years. The number of
those who belong to the Church of England fell below 15%, including just
3% of English young people ages 18-24. Writing in the Spectator, Damian
Thompson wondered if “the Church of England is dying”. Churchgoing
dropped by 50% also in Scotland. Another report revealed that more than
half the British population has no religion at all.

According to internal documents from the Church of England,
Christianity is dying in Britain at such a pace that in the next three
decades, Anglican congregations will halve again. Christians in the UK
are on course to be in the minority by the middle of the century.

What defines Europe are its boundaries – not physical but cultural.
Without its culture, Europe could not be distinguished from the rest of
the world. And the pillar of this culture is based on the
Judeo-Christian heritage and values.

The journalist Melanie Phillips stated that the Church of England, by
embracing trendy ideological extravagances such as gender ideology, is
now culturally “sowing the seeds of its destruction.” The goal of all
this “inclusivity,” according to Phillips, is actually to “overthrow the
Christian basis of the West”.

Lord Carey, the former Archbishop of Canterbury, has said that
“political correctness” is bullying and undermining Christianity in the
UK. “I cannot imagine any politician expressing concern that Britain
should remain a Christian country; that reticence is a scandal and a
disgrace to our history.”

According to a new poll, a total of 41% of British millennials, born
between 1980 and 2000, said that the UK has “no specific religious
identity”. As the progressive publication Prospect asked, “if we are no
longer a Christian country, what are we?”. Former archbishops of
Canterbury have warned that the UK will be soon unrecognizable. Rowan
Williams has said that the UK is already “post-Christian”.

The existential crisis of the Church of England does not involve only
the third Christian congregation in the world, represented by
Anglicans. The crisis is also going to tear apart a source of the
British landscape, politics and culture. Recently, The Spectator
featured “The end of British Christianity” on its cover, where one
elderly lady is seen as the only faithful in a cathedral.

“It’s often said,” the magazine continued, “that Britain’s church
congregations are shrinking, but that doesn’t come close to expressing
the scale of the disaster now facing Christianity in this country. If
that rate of decline continues, the mission of St Augustine to the
English, together with that of the Irish saints to the Scots, will come
to an end in 2067”.

The level of atrophy in the Church of England is so extensive that
Anglicanism is expected to collapse “for the next thirty years”. There
are also rumors that “half of England’s Anglican cathedrals could
close”.

Cardinal Cormac Murphy-O’Connor said recently that in the UK,
Christianity has been “nearly defeated”. If the Church of England
disappears, there will be a totally different UK. The British historian
Niall Ferguson has called it “the creeping Islamization of a decadent
Christendom”.